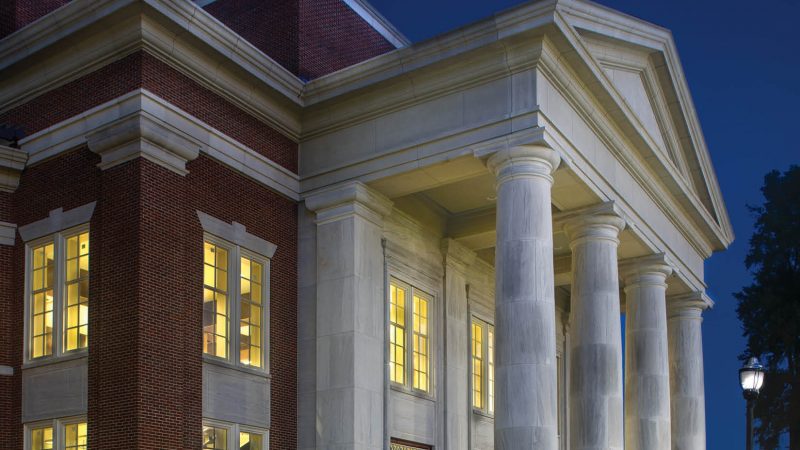 Just as it did almost a century ago, The University of Alabama is undergoing a transformation, turning big dreams into reality.

Nine buildings and 625 students comprised The University of Alabama campus when George Hutcheson Denny took office as university president in 1912. Void of sidewalks and paved roads, what is now the state’s flagship university was merely a blip on the map, severely underfunded compared to other institutions of higher education across the region.

Denny brought a vision of a bigger and brighter future to the University, and as the student body swelled, he estimated that “a million dollars” was necessary to immediately construct 15 buildings, thus the Million Dollar Campaign was born.

At the completion of his presidency, Denny had transformed The University of Alabama. At his retirement in 1936, the Capstone boasted 23 major buildings, 25 fraternity and sorority houses and almost 5,000 students. Denny’s successes are still marked across campus, from the resounding bells of Denny Chimes to the formidable Bryant-Denny Stadium.

More than a century has passed since Denny came to the Capstone, and history, as it is oft to do, has repeated itself. Today, the University is undergoing a modern day million dollar campaign driven by the vision of Dr. Robert E. Witt, university president from 2003 to 2012. Student enrollment and caliber have increased simultaneously with the size and scope of campus, as $2 billion has been spent on construction in the last 12 years. Witt recently retired from his role as chancellor of the UA System and was named president emeritus of the University, and even as the tide changes, his vision rolls on.

To do that, Witt said, the University had to grow with “balanced excellence.” Not only did the academic prowess of the institution need to improve—and it did, thanks largely in part to an intensely personalized recruiting effort—but the facilities as well. “Part of balanced excellence is working to ensure that facilities, broadly defined, would fully meet the expectations of our students, as well as the faculty that we hoped to recruit and retain and our staff,” he explained. “When you talk about facilities in that context, a word that people frequently move to fairly quickly is, Alabama wanted to have facilities that were ‘fully competitive’ with any university in the country.”

That sentiment is accurate, Witt said, but incomplete. “When we began this transition, unfortunately there was—and I would stress the word inaccurate—there was across much of the country an inaccurate perception of the state of Alabama and, in some ways, the South in general,” he explained. “So as I looked at facilities on this campus and thought about what it would take for us to be competitive, I felt we had to have facilities that literally were better than anyone else, because that would help counteract the inaccurate perception of the South.”

The University began construction at a record pace, opening a new building every 90 days over a nine-year span. This pace in itself, Witt said, became a driving force for student enrollment. “Part of the reason we were so aggressive in attacking the facilities area was the rate of activity itself became a very powerful message,” Witt said. “Students who came here in the fall of ’03, two years later could look back and say they opened up eight new buildings in two years.”

Success breeds success, Witt explained, and as the message of growth at the University spread, his vision grew closer to fruition with each brick of each building constructed. “When students go home at Christmas, Thanksgiving and for the summer, they are talking about the rate of change,” he explained. “Faculty are talking about the rate of change. We were in the process of turning a vision—a national university of choice for the best and brightest—into a reality. We wanted to do that in a short period of time and the momentum of our construction program became a very important part of that process.”

In the 12 years since Dan Wolfe arrived at The University of Alabama, more than $2 billion has been spent on campus improvement. As the university planner and designer, Wolfe and his department are responsible for the exterior of campus—building locations, roads, bike lanes, signage, landscaping and artscaping, among other facets. “It’s the greatest opportunity ever,” Wolfe said. “It’s no fun being the planner if there’s not much going on because there’s not much to plan, so it’s been the perfect storm of opportunities to be here during this period of growth.”

Witt’s dedication to his vision for the University was apparent across campus, Wolfe said, and made all the difference in the success of the University’s growth. Administrators often overlook the importance of campus beautification and facilities in respect to overall university growth, he added. “Right from the very beginning, Dr. Witt knew if the facilities were good and the campus made a great first impression, that would really help him in the recruiting of students to the numbers he projected,” Wolfe explained. “You had the right people come together with the right attitudes, and it was really the right time as far as funding goes. Because of the recession, interest rates were as low as they’ve been in years; construction costs were reasonable because there wasn’t a lot of work.”

Since 2003, 88 new buildings have been constructed to accommodate the growth in campus population. The University has also seen 59 major renovations and the demolition of 84 structures. New projects completed for the fall 2016 semester included North Lawn Hall, a 2,000-seat classroom building on the Bryce campus; a new retail facility on Paul W. Bryant Drive, featuring Starbucks Coffee and an extension of the SupeStore; new Greek houses, including sororities Kappa Kappa Gamma and Phi Mu, and fraternities Kappa Alpha and Phi Kappa Psi; and an addition to the Moody Music Building.

To meet that challenge, the University acquired the neighboring Bryce Hospital grounds. Offering 168 acres contiguous to campus, Wolfe said it is the single most important decision the University has made in regards to land management due to the potential for renovation and development. “There were rumors when we acquired Bryce that we were going to go in with a bulldozer and just bulldoze the whole thing down, all we really wanted was the land, and that was really never true,” Wolfe explained. “We went in and did building audits and went in to every building on Bryce grounds and determined if it had good adaptive reuse for the University or no it didn’t.”

Working with the Alabama Historical Commission, the University decided the iconic white building with its signature tower will remain, as will four of its wings, two on each side of the building. The building is currently being stabilized and will eventually house the University welcome center, a museum of university history and a museum of mental health, paying homage to the building’s storied past. The building will also house the theatre and dance department and boast a performing arts center, including a drama theater, a dance theater and a studio theater, in addition to several rehearsal venues.

As facilities are updated and created, road construction is necessary, including an overhaul of University Boulevard. The well-known concrete paving that once marked the entrance to campus—originally installed in 1947—was replaced with fresh asphalt and new landscaped medians. Both Peter Bryce Boulevard and North Campus Way opened for the fall 2016 semester. Roads are instrumental in transforming the Bryce property to facilitate easier access to the new construction, Wolfe said.

Newer projects on the drawing board, Wolfe said, include a new food service location, Au Bon Pain, on the Bryce campus. Phases two and three of the University Boulevard beautification and resurfacing project are planned, ultimately extending from Hackberry Lane to the Alberta bridge. The existing Moody Music Building will be refaced. A new freshman dormitory will be constructed where Palmer and Somerville were located, and the new site will hold 400–500 beds in traditional-style rooms, Wolfe said. H.M. Comer Hall is slated for a renovation, as well as the Bryant Conference Center. Three new sorority houses are also planned: Alpha Omicron Pi, Delta Zeta and Pi Beta Phi. Zeta
Tau Alpha is slated to open in December 2016. An adaptive athletics facility is also is in the planning stages, Wolfe said, which will be one of the nicest facilities of its kind in the nation. Solely dedicated to adapted athletics, the building will be located on the south side of the Student Recreation Center.

“We kept thinking, ‘It will slow down, it will kind of slow down,’ and it never has,” Wolfe said. “It’s just gotten busier and busier. When I came here, I knew the campus could be, and needed to be, better. Just attention to details, things like that. One of the things I’ve always said is it was like a beautiful apple; it just needed to be polished. Hopefully we polished the apple a little bit and grew it and really made it better.”

University President Dr. Stuart Bell now drives the future of the Capstone since taking office in July 2015. In his year at the helm, a new strategic plan has been crafted to serve as a guiding force for The University of Alabama and its future endeavors. “The University has accomplished significant growth at the undergraduate level, and we were at a point where it was time to rediscover our direction and aspirations,” Bell said.

Arriving at the University during a period of such positive change, Bell said, provided an opportunity to reflect, but also to dream about new goals for the Capstone. “I think it was a very timely arrival for me to be able to now say, ‘Let’s pause here for just a moment and look where we’ve gone,’” he explained. “That’s always important, but sometimes self-gratifying to do that too much —but then to say, ‘Okay, now where do we need to go from here?’ I think this plan has allowed us to dream—and to dream big—and to look at how we can build on all the great successes we’ve had and build an even greater flagship university for Alabama and the nation.”