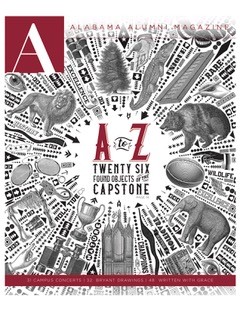 Thirty-five years after Bryant’s death, his impact is still felt.
by Caroline Gazzara

Nearly 3,000 people filled three churches in downtown Tuscaloosa and thousands more stood along the roadside to Birmingham to get a glimpse of a three-mile funeral procession, the day that Paul W. Bear Bryant was buried under a hickory tree, on Jan. 28, 1983.

For much of Alabama, time seemed to stand still.

As many as 5,000 people, some say, gathered at Bryant’s graveside at Elmwood Cemetery in Birmingham. Others still, crowded around televisions to watch the funeral, including school children, who huddled with their teachers, paying their respects to a legendary coach.

It was a day of mourning, not just for the state, but for the country.

“A coach is looked up to, but with Bryant, it was tenfold,” said Taylor Watson, museum collections specialist at the Paul W. Bryant Museum.

Thirty-five years after his death, Bryant’s impact on the Capstone is still very much alive.

The legacy of Bryant is apparent everywhere in Tuscaloosa. From street names, to campus buildings, to the famed Bryant-Denny Stadium, the Bear’s legacy lives on.

Shortly after his passing, people from across the state and country sent items to his widow, Mary Harmon Bryant, and the University. Letters, artwork, memorabilia, and more were sent to the family after his passing, and even decades later. The Bryant Museum still receives items from time to time.

“Bryant’s legacy is as strong as ever,” said Ken Gaddy, director of The Bryant Museum. “If you walk out the door, there’s houndstooth everywhere. It’s almost like the third color of the University: Crimson, White and houndstooth. It’s a positive thing to have.”

In the mid-1980s, the Bryant family donated a large lot of items to the museum. Still sifting through everything, Watson discovered more than 20 grade school drawings from 1983. The drawings have sat in the Bryant Museum Library collections, waiting for their moment to shine.

From a Classroom in Hoover

Ann Downing was teaching art at Green Valley Elementary School in Hoover, Alabama, when she heard the news. An alumna of The University of Alabama, Downing was a huge Alabama fan, and an even bigger Paul “Bear” Bryant fan.

But on Jan. 26, 1983, Downing was heartbroken. The Bear passed away just a month after his last game, when the Crimson Tide won the 1982 Liberty Bowl against the University of Illinois.

Bryant joked shortly after coaching his last game that he would “croak in a week” once he retired. One month after his last game, Bryant passed away due to a heart attack at Druid City Hospital, now known as DCH Regional Medical Center.

It seemed that everyone, in some way, was affected by Bryant’s passing.

In her final year of teaching at Green Valley, Downing was moved by Bryant’s death—so much so, that Downing instructed her second grade students to draw something that reminded them of Bryant, and then write a sentence or two about the famed coach. Downing then attached the drawings to construction paper and hung them around the school for a few weeks. In total, 22 second-grade drawings were hung with pride at the school. Later on that school year, Downing sent the drawings to Mrs. Bryant, where they sat in the Bryant estate for years.

“I’m an Alabama fan,” Downing said. “Everyone knew of Bear’s passing but we wanted to show support for Mrs. Bryant. It wasn’t just the second grade class, the whole school made drawings.”

It wasn’t until 2010 that the drawings were uncovered at the Paul W. Bryant Museum. Watson, who searched for the students about five years ago, during what would’ve been Bryant’s 100th birthday, said there’s not much information about the drawings. “There was only (the letter) that was with the drawings, nothing else,” Watson said.

Watson said the drawings were in a separate box from other condolence letters, meaning that Mrs. Bryant, or her daughter Mae Martin, thought they were important.

“I just love these,” Watson said. “They’re just so genuine.”

Some of the drawings have depictions of the Bear’s famous houndstooth hat. Others are decorated with footballs and elephants.

Emily Jolley, now an attorney in Guntersville, was one of the students at Green Valley Elementary. Jolley’s drawing includes rainbow clouds and the legendary hat. She also included the sentences “I will not forgit the Bear. He was the best coch. The winningest colege coch in history.”

Although Jolley’s spelling wasn’t perfect, the sentiment is there, Bryant affected more than just the people he was affiliated with.

“I do remember when Bear Bryant died; I remember us talking about it in (Downing’s) class,” Jolley said. “It was almost like if the president had died. It was such a big deal. I remember watching the funeral procession in class.”

While Jolly doesn’t remember what she drew, she remembers doing a lot of artwork in Downing’s class. She also remembers the impact felt by Bryant’s death. “It was kind of like, almost like when President Kennedy died, because Bryant was a hero and leader,” Jolly said.

Those second grade students were roughly seven-or-eight years old when they made their pictures. Now in their early 40s, those students reflect back on the drawings they created. Some were shocked to know thir drawings are still around, others were filled with nostalgia.

“It is definitely surprising to find out that this artwork is still around and is now in Tuscaloosa,” Jolley said. “I mean, I can’t believe that it would have been important enough for anyone to save, especially now that I’m 42 years old. It’s cool to me to be able to look at something I did in 2nd grade is still around.”

John Rives, a controller at B.L. Harbert in Birmingham, was also one of Downing’s second grade students at Green Valley so long ago. In his picture, Rives drew “The Bear” holding an Alabama football. Rives’ wrote about Bryant’s death and his funeral under his drawing.

“I was just a kid in second grade when Bryant died,” Rives said. “I remember it all was important and a big deal. I think the school somehow rolled out a TV to watch the funeral procession, which was televised. I just remember it being a big deal at school.”

Rives, who ended up going to school at Auburn University and graduating from Birmingham-Southern, was unaware his drawing was sent to Mrs. Bryant back in 1983, but he said in hindsight, it was very sweet of Downing to think of her.

“I think it’s pretty fun that it’s at the Bryant museum now,” Rives said. “If you think on it, for a second grade class (drawing), the teacher was thoughtful enough to send that in, to make (Mrs. Bryant) feel good. I think if I were in that situation, I would have appreciated it.”

Daryl Yager, one of Rives’ classmates in 1983, agrees. Although he doesn’t remember much about Bryant’s death, it’s special that the artwork is still around, years later, he said. Yager’s drawing features the word “ALABAMA” written in bright red crayon with a deep purple background.

It’s especially sentimental for Yager, now a client manager for health and welfare benefits, since he went on graduate from UA in 1996. His son plans to follow in his footsteps. “I grew up an Alabama fan as long as I can remember,” Yager said. “My time at Alabama was very positive. I have a rising senior son who is claiming he wants to do the same thing, and go to Alabama.”

Scribbled with sky blue and the word Alabama in the clouds, Brian Waldroup’s drawing may not be like the rest of his class’ art, but it’s still special. For Waldroup, a police officer in Texas, the word Alabama reminds him of Bryant. He also included that he will always be for Alabama.

This statement still rings true for Waldroup. Although he moved to Texas in 1984, Waldroup is still an Alabama fan. His father got him into the Crimson Tide.

“I don’t remember the project, but I’m still an Alabama fan,” Waldroup said. “My whole family still lives in Alabama. When I was really young, I remember going to a game with my dad when Bryant was coaching. I was probably in first grade. I can’t tell you if they won or who they played, but it was at Legion Field. But I do remember when Bryant died.”

For many people who were alive at the time, the day Bryant died is an emotional marker in time. For many Alabama fans, no one has had a larger impact on The University of Alabama Crimson Tide, or no one else except perhaps Nick Saban.

Bryant’s memory lives on—one only has to step on campus to witness it—whether it’s his name on street signs, Bryant’s statue seemingly standing watch in front of Bryant-Denny stadium, or a collection of school kid drawings at the Bryant Museum Library—Bryant’s legacy is lasting, 35 years later.