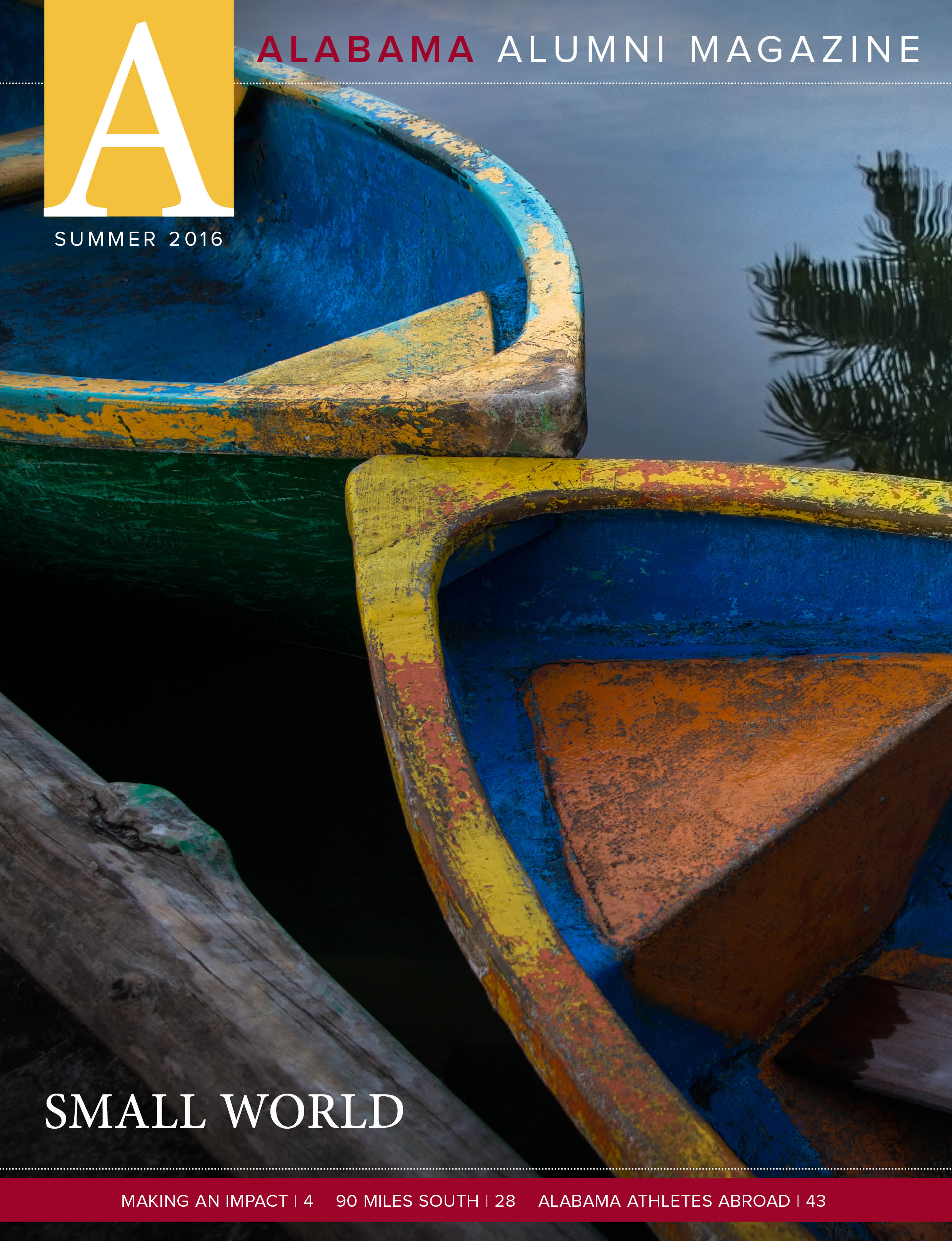 Through the Cuba Center at The University of Alabama, students and professors benefit from the unique opportunity to learn from the country whose doors have been closed to the United States for decades.

He was familiar with cities. After several years and trips and projects, photographer Chip Cooper knew the ins and outs of urban areas like he knew the controls of his camera. He had seen the decay and drawn from it—he had met the people and learned from them. He knew the country positioned only 90 miles from Florida’s southernmost point far better than most Americans ever did.

But he didn’t really know Cuba.

It took the help of Julio Larramendi, renowned Cuban photographer, and a two-door Suzuki to learn about the heart and soul of Cuba, a truth many Cubans aren’t even familiar with. “Julio said, and I always remember these words, ‘Chip, you think you know Cuba, but you don’t,’” Cooper explained. “‘The real Cuba is outside the cities in the countryside.’”

Cooper, Larramendi and two other Cuban photographers piled in that two-door Suzuki, strapped their luggage to the top and traversed the island nation that has been isolated from the U.S. for decades. With Beatles music as their accompaniment, the four photographers—the amigos, they call themselves—traveled 12,000 miles to 40 places, taking thousands of photographs, ultimately producing Campesinos: The Heart and Soul of Cuba.

The book has had exhibitions across the globe, from the Vatican to Sicily to China, and the friendship between Cooper and Larramendi has grown in the Honors College at UA, where Cooper works as a faculty member and artist in residence and Larramendi is the visiting artist in residence. Both teach classes and have taken Honors College students to Cuba for the last four years. “Something that started as very small has now morphed into something that drives my life,” Cooper said. “The energy between me and Julio has transpired to the classroom.”

These are numbers Olin never anticipated when the University made its first exploratory trip in 2002. “I came in fall of 2000, and in getting out to meet all the departments and having conversations with them, I found it serendipitous—every department had somebody that had a Cuba interest,” Olin said. “I told [interim president] Barry [Mason], this is one project I don’t have to sell. The interest is there—I just have to fertilize it.”

Olin and Arts and Sciences organized a trip with representation from across campus to explore the possibility of establishing a lasting UA presence in the country. Immediately upon arriving, Olin realized that a program based in Cuba would not only benefit his staff and their research interests, but satisfy the goals he sets for students who come through his college. “I’m a believer in three things for my students before they graduate: I want them to try and do an undergraduate research project, try to do an international program or do service learning,” Olin said. “Here you have this country that’s a totally different world and only 100 miles from our shores. I can put them in this place and they can experience all the things I want them to do.”

After navigating the legal requirements, the University began the Cuba Initiative, which, at the start of the project, was one of approximately 50 American universities collaborating with the country. After President George W. Bush took office, Olin said that tally diminished to only four—American University, North Carolina State, Harvard and The University of Alabama. “You earn a lot of respect,” Olin said. “They realize that The University of Alabama wasn’t one of these one-stop shops that comes down here and sight sees, that we were really dedicated to making the relationship work.”

The Cuba Initiative expanded very quickly in an effort to open travel to all colleges across campus. Not only have students been able to travel for academic purposes, but the UA baseball team has made the trip as well and is planning a trip in two years to play a three game series with the Cuban national team. The initiative transformed into the Cuba Center, its current organization, in 2015. In changing from an initiative to a physical center, the program now has a permanent stream of funding and is grounded in the roots of The University of Alabama. This move, Olin said, allows the center to live on beyond his tenure as dean.

Simply expanding the original initiative to its current state is not the end of the journey for Olin. Immediate goals include linking UA and the University of Havana via virtual classroom so that students who can’t travel to the island nation can still have virtual contact with the distinct Cuban culture. He also hopes to gain a piece of property to serve as housing for professors traveling for research and semester students.

Each spring, Dr. Michael Schnepf, co-director of the center, travels to Cuba with a select group of Spanish majors, looking to share the country he’s grown to love with students. While Cuba, which sat atop his bucket list for many years, has now become a part of him, Schnepf’s first visit to the country was a stark contrast to his summers spent researching in Spain.

“The first time I came, I was shocked because Cuba is a poor country, and the first time you see some of the buildings and the shape of the streets and the condition of houses, it’s very shocking,” Schnepf said. “My perspective since then has changed greatly. Now when I come to Cuba, I see the people. I see past the buildings, but when you do see the buildings, there’s a certain beauty to these old buildings. Cuba has gotten into my blood.”

Last semester Schnepf led 13 students from coast to coast, almost double the number of students he has taken in the past. Each one was required to work on a research project that lasts the duration of the semester, as well as four additional classes: a roundtable led by Schnepf, a class with other Cuban students—this year, many students were enrolled in a course on American history taught from a Cuban perspective, a class on Cuban culture, and a class on U.S. and Cuba relations from taught by Cuban professors.

Outside of the classroom, students get to travel across the country, frequenting locations around Havana and across the entire island, including the Bay of Pigs. Sundays are the only truly free days of the program, Schnepf said, but students are still immersed in the culture that often provides a bit of a shock. “Coming to a Third World country wakes students up a lot,” he said. “You learn what it is to shop in Cuba. You may go to four different stores—you buy your bread at one place, your veggies at one place, your meat at another place, and it’s difficult. And then when you go home and go to Publix, you’re amazed at what we have in the United States.”

That firsthand experience was what Michael Goetsch, a 2015 UA graduate with undergraduate degrees in Spanish and biology who spent a semester with Schnepf in Cuba, recalls as the most important part of his trip. “As Americans, we hear a lot about Cuba, Cuban leaders, and the Cuban people whether it be in our textbooks, in the news, or online,” he explained. “But in traveling there myself, I found that the reality doesn’t entirely match our preconceived notions. And frankly that’s been true of every country I’ve visited, not just Cuba. I think that’s always something important to keep in mind not just when you’re traveling or studying.”

Much like the shock of the drastic dialect fades—Cuban Spanish is a very distinct dialect—the initial shock over the impoverished state of the country generally disappears over the course of the program. Students are able to meet natives from all walks of life, from taxi drivers to university presidents. Those relationships, Schnepf said, are some of the most important memories students take with them. “They see the same things I saw when I first came here,” he explained. “It’s a poor country. We don’t see that in our lives all the time. There’s rubble, there’s garbage and things like that in different places, but after a while you see what’s really important. You see the people.”

The prominence of the people is a sentiment that rings true Goetsch. “I’d say the most memorable moments for me came from my time spent with local friends and Cuban students,” he said. “Classes and academic excursions were certainly valuable, but my favorite moments, and maybe the best learning experiences came from independently spending time with local friends and exploring the city for myself.”

On his first trip with the University as a photographer, Cooper also saw the decay. While he was told about Cuba’s positives, Cooper also saw the struggle. “Being a photographer I was out shooting pictures and realized—and this is where I came to my statement two plus two is five—what I was hearing didn’t add up to what I was seeing,” he explained. “And what I was seeing many questions that some could be answered and some could be answered with, ‘It’s complicated.’”

Years later—12,000 miles and thousands of photographs later, he knows the people. Through the help of Larramendi, the two have been able to share the heart and soul of Cuba with not only their students, but with people across the world. Cooper saw a kindness in those people in the countryside, he said, and a sense of ingenuity.

“I saw a proudness that came out of stubbornness, the will to survive, to go to any length to survive, with a sense of humor and a sense of dignity that I didn’t necessarily see in our country,” Cooper explained. “The worst hovel of a home—from the outside you would say ‘Who would live here?’ When you approach the house, somebody walks out in tattered clothing with a tattered broom and they’re sweeping the dirt floors, and the house is clean.”

While Cooper and Larramendi both agree that there are far more similarities between Cuba and the United States than there are differences, Larramendi hopes his students can learn from these differences during their time in his homeland. “Cuba was colonized by Spaniards, but we have also French people, a black population who came from Africa as slaves, we even have Chinese,” Larramendi said. “You look at any Cuban, and there is no pure black or white. There is no discrimination. In Cuba, we’re all Cubans.”

After their semester spent in the country, many University of Alabama students find themselves changed, possibly learning more from the people they meet than the courses they take. “They are always incredibly thankful for the experience,” Olin said. “They form deep friendships, and the fascinating thing is they realize how much their friends are struggling economically. Many of them, the only clothes they bring back were the ones they are wearing. They leave everything for their friends.”