To the End of the Earth 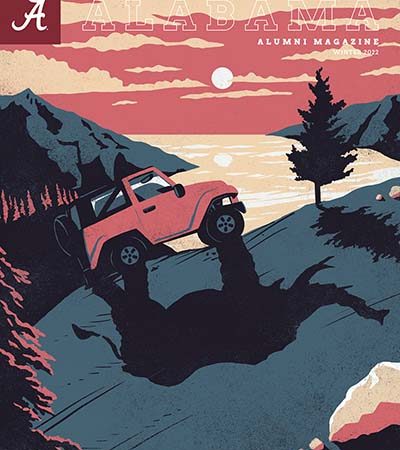 The year is 2010. More than 106 million Americans watch the New Orleans Saints upset the Indianapolis Colts in the second half of Super Bowl XLIV. Dr. Rebecca Totten’s mother, a city planner in New Orleans, prints out a picture of her daughter, telling a group of Saints linebackers she meets, “This is your southernmost fan.”

Totten, an assistant professor of geological sciences at The University of Alabama, remembers that day vividly for two reasons. First, the Saints victory meant everything after the devastation of Hurricane Katrina in her community. Second, that was the day she officially began her first research expedition into the frigid waters of Antarctica.

Years before her first Antarctic expedition, Totten’s scientific journey began with a love for vertebrate paleontology, specifically extinct swimming lizards called mosasaurs. This prevailing interest led her from the University of New Orleans to the University of Kansas for her undergraduate degree; however, the impact of Hurricane Katrina on her family, friends and neighborhood shifted that trajectory.

“I had just moved away to college and three weeks later Katrina hit,” Totten said. “I already knew that I wanted to be a geologist and paleontologist, but that experience of having my family live through Katrina made me start to think about the context of how sea levels rise and how storms and climate are drastically changing.”

Under the guidance of Dr. John Anderson, affectionally nicknamed Mister Antarctica, Totten embarked by jet to McMurdo Station, a United States research center in West Antarctica, and from there boarded an ice-breaker research vessel to study sea-floor samples with no human civilization in sight. Her research into climate phenomena in Antarctica served as the basis for Totten’s doctoral research at Rice University.

“As someone who grew up without experiencing snow, I instantly fell in love with Antarctica,” she said. “I wanted to study where climate is changing right now, and where we can really observe it.”

Scientists like Totten use tiny shells from sediment core samples to help identify past climate events. The micro-fossils Totten studied from her doctoral research indicated that warm water was flowing into the West Antarctic Ice Sheet six to 2,000 years ago as glacial retreat occurred.

More than 10 years later, those samples have benefited some of Totten’s many research contributions as an assistant professor at The University of Alabama. Teaming up with Dr. Yusuke Yokoyama and Dr. Adam Sproson at the University of Tokyo, she and colleagues analyzed the samples with a new application of beryllium isotopes, which revealed the existence of an atmospheric river between nine to 6,000 years ago. They published these findings in a Nature Communications paper in 2022.

“By applying new methods with these different isotopes of beryllium, we were actually able to show that vast melting in West Antarctica was directly related to atmospheric warming because it was connected to the warming tropical Pacific,” said Totten. “We concluded that there was an atmospheric river connecting these two regions, bringing warmth to Antarctica and causing widespread melting.”

The team’s study revealed that, although glacial retreat in the West Antarctic Ice Sheet has been mostly attributed to warm ocean water, atmospheric warming is also a major source of concern for this region of Antarctica.

Discovering this pattern in the past of glacial retreat will help scientists create sea-level predictions with greater accuracy. Not only can these data improve understanding of the rates at which ice sheets continue to melt, but the team’s data also benefit the research on sea-level impacts for communities far removed from the West Antarctic Ice Sheet.

While sediment in the Arctic reveals the history of glaciers, similar samples along coastlines can reveal the history of another climate event: hurricanes.

“We collect these things called sediment cores—it’s basically the mud on the seafloor—and we go back in time with layers in the sediment. We do this in Antarctica

to study the history of the glaciers and the ocean, and we have done this in the Gulof Mexico too. In southern Mississippi, for example, we can see where we have the 2005 Hurricane Katrina event as a distinct sand layer, and even Camille from 1969, and we use that to calibrate and say: We know what Katrina is like, we measured how intense it was, and with that knowledge we can go back farther in time going down into the sediment core and see the layers where there were significant hurricanes over the last few thousand years,” said Totten.

“I don’t just study the glaciers, I also study our backyard: the northern Gulf Coast, specifically Mobile Bay,” she said.

Totten always knew that she wanted to teach. After working in the energy industry for a year, including coring from offshore oil rigs in the Gulf of Mexico, she entered the world of academia by accepting a position in the geological sciences department at UA. In addition to the appeal of near gender parity in the department, a difficult quality to find in a male-dominated field, a major draw of the University for Totten was the opportunity to study Mobile Bay and Dauphin Island.

“If we take mud from the five main flooded bays of the Gulf of Mexico, all these different systems show that we had an extreme sea-level rise event that caused them to flood around 8,000 years ago,” Totten explained, “and that was the last time in which sea-level rise raters were similar to what we are experiencing on the Gulf Coast right now … about 4 millimeters per year.”

This drastic sea-level rise poses a great risk to the coastal communities of the northern Gulf Coast, especially considering that Mobile Bay lost the greatest land area 8,000 years ago due to its shallow topography.

“Every time a storm comes, that’s going to first hit the barrier islands and the coastline that’s exposed, so you lose a lot of sediment. That affects where people live very directly. Sea level rise, too, shrinks the barrier islands that protect us from storms. The coastline is migrating landward as you raise the sea level,” said Totten.

Totten and her colleagues, Dr. Emily Elliott in UA Geography and Dr. Davin Wallace at the University of Southern Mississippi, are further studying sediment resources that can prevent and help repair major damages to the coastline. Working with funding from the Bureau of Ocean Energy Management, they look for resources offshore by scanning the sea floor

with seismic imaging, taking sediment cores, and “reconstructing environments to try to understand how the coastline migrated from the ice age to see where we can find preserved volumes of sand,” she said.

One of the best ways to directly protect the coastline is renourishing beaches with sediment dredged offshore. The more similar the new sediment is to the original make-up of the beach, the better, both for aesthetic and for ecological reasons. For example, Dauphin Island renourished its beach in recent years in the hopes of creating a more sustainable coastline, and Ship Island finished renourishing a major cut through the island made by Hurricane Katrina.

From dinosaurs to icebergs to Mobile Bay, climate research reaches far and wide, if not mostly backward into the past. All of Totten’s combined experiences, collaborations and scientific investigations reveal a myriad of impact risks to the livelihoods of coastal communities in Alabama and beyond. With the many aspects of global climate considered, Totten sums up her work with one key message:

“The past is very important to understanding the present so that we can better predict the future and plan for it. I take this perspective that not many have so that I can help solve these problems that are relevant to society, especially for the resilient communities that live and rely on the coast.”