The origins of crimson lore: why we are who we are 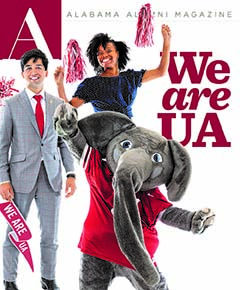 It’s hard to think about Alabama football without the “Yea, Alabama!” fight song coming to memory, or iterating the phrase “Roll Tide.” And the Capstone wouldn’t be the same without the Crimson Tide or Big Al. Here, we dive deep into the origins of UA’s icons and traditions.

In 1920, the Capstone had existed for nearly a century with an established identity, but the school’s ubiquitous fight song was not created until much later. In 1925 The Crimson White student newspaper advocated for a unique UA fight song, writing: “Along with a championship team we should have a championship song … We want a new song and we want it now!”

In October of that year, the campus humor magazine, Rammer Jammer, offered $50 to anyone who could come up with the best fight song. After the team won its first national championship at the 1926 Rose Bowl, fans began calling for a fight song more than ever.  Ethelred “Epp” Sykes, The Crimson White editor-in-chief at the time, was announced as the winner of the contest with “Yea, Alabama!” Sykes donated his prize money to pay for an arrangement so the Million Dollar Band could play the school’s new official song by the 1926 football season.

Located hours from the nearest ocean, it seems ironic that UA would be associated with a tide, yet one cannot separate the Capstone from its nickname of the Crimson Tide.

The University’s football team has been associated with crimson and white since its creation, donning the red and white jerseys of the then-military school. The first popular nickname for the team was the “Thin Red Line,” used by the media until 1906. It was not until the 1907 Iron Bowl game that the term “Crimson Tide” was first coined. As Alabama held the then-favored Auburn at a 6–6 tie, rain began to pour, staining the players’ white uniforms crimson. In recalling the game, Birmingham Age-Herald sports editor, Hugh Roberts, referred to the team as a “Crimson Tide.”

Elephants have been associated with the Crimson Tide since the 1926 football season, when each player carried a complimentary suitcase from J.D. Rosenberger’s Birmingham Trunk store while traveling to the Rose Bowl. Decorating each “trunk” was a large red elephant logo, leading reporters to conclude that an elephant must be the team’s mascot.

Another possible explanation links to sportswriter Everett Strupper of the Atlanta Journal, who during the 1930 Alabama vs. Ole Miss game detailed the massive size and strength of the players, writing, “At the end of the quarter, the earth started to tremble, there was a distant rumble that continued to grow. Some excited fan in the stands bellowed, ‘Hold your horses, the elephants are coming,’ and out stamped this Alabama varsity.”

Coach Paul W. “Bear” Bryant associated elephants with sluggishness rather than the ruthless power and athleticism he required from his team. However, in the early 1960s, Bryant allowed student and later UA administrator Mel Espey to don a red elephant costume during a game. The exception did not come without warning, as Bryant reportedly said “never let that big rat get anywhere near me” while he was coaching on the sidelines. The red elephant was discontinued in the mid-1960s. In 1979, students met with Bryant after passing a Senate resolution calling for a new mascot. Bryant agreed.

The University hired the Walt Disney Company to design and create the newly conceptualized “Big Al” after being named by a student contest during the 1979 homecoming. Hugh Dye, a UA student who auditioned for the mascot role, was the first to officially portray Big Al. At the 1980 Sugar Bowl against Arkansas, Big Al made his debut as coach Bryant won his last national championship.