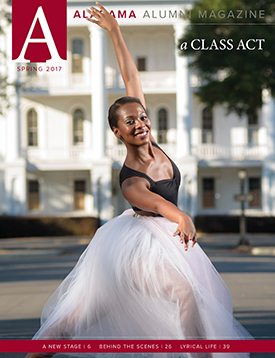 UA’s Fast-Growing Department of Theatre and Dance Will Have a New Home.

For a lucky few, a stage is a beginning. It’s the path to a perfect pirouette or a standing ovation, to Broadway, Hollywood or a distant land. If Shakespeare was indeed correct and all the world is a stage, then there are those who have a corner on the market: Their home, their world, has always been the stage.

For those pursuing a degree from The University of Alabama’s Department of Theatre and Dance, their stage does in fact span all the world—to performances of “Hamilton” and “Kinky Boots” and to standing ovations at productions in Scotland, France and Ecuador.

“We have been on a great run these past few years,” said Bill Teague, professor and chair of UA’s theatre and dance department. “Our students really have major accomplishments in the entertainment business, and it’s those accomplishments that we’re so proud of.”

Just as theatre and dance’s faculty, staff and students have gained prominence, so too has the department itself, doubling its enrollment in the last decade. It’s a growth that allows the department to draw a larger crowd than any other non-athletic program on campus.

It’s a growth that has warranted a new home.

With the purchase of the 168-acre former Bryce Hospital property in 2010, UA acquired that new home, with development plans Teague deems a “crown jewel” for the University.

Now in the final phases of planning and the beginning of construction, the historic Bryce main building and the planned $60 million Performing Arts Academic Center stand as a promise for the future and a nod to the department’s past and present successes.

The past meets the present

Though theatre has been performed on UA’s campus in various forms over the years, theatre and dance became an academic entity only in the late 1930s.

It is thanks to prominent names like Marian Gallaway and Allen Bales—namesakes of two of the theatres on UA’s campus—that the department was birthed as we know it today, Teague said. “They were so nationally prominent that we have always been able to attract good faculty and good students,” he added.

However, that didn’t necessarily mean the accompanying facilities were built as planned. The current home of the department, Rowand-Johnson Hall, was actually left “with a hole literally in the middle of the building” due to lack of funding when it was first built in 1956, and the Gallaway Theatre’s design had to be adjusted to meet the economic realities.

Those adjustments unfortunately have left the facilities wanting, Teague said, noting it hasn’t had any significant renovations in the past 60 years. But that did not keep theatre, previously paired with speech and communicative disorders, from blooming in its own right and becoming the unified theatre and dance department in 1979.

In the late 1980s, the department formalized a graduate student arrangement with the Alabama Shakespeare Festival in Montgomery, Alabama, and the dance major was in its embryonic stages after previously only being an area of interest. As the department and the University grew, so did theatre and dance’s offerings: The musical theatre program came online in 2001, putting it “on the forefront” as many higher learning institutions had yet to develop one; and Dr. Robert E. Witt’s appointment as president of the University in 2003 was a boon for growth as well, Teague said. “We actually have grown a little faster than the overall University, but we have certainly benefitted from its growth,” Teague said, explaining that as the number of students increased, so did the department’s potential. “Our faculty only grows as our students grow.”

And grow the department did.

The department jumped to 360 total students from 125 just a decade ago, Teague said, thanks to being the first college outside of New York to host American Ballet Theatre Summer Intensives that attract 200 middle and high school students each year; producing four legitimate Off-Broadway shows, giving the department “very positive national exposure”; hosting Summertide Theatre performances in Gulf Shores, Alabama, each summer; and being represented at national and international festivals. “We’re not just in Tuscaloosa anymore,” he said of the department’s recruiting efforts, which have prompted 70 percent of the students to come from out of state. “We look at it as a national event, not just a local or state event. From Seattle to Miami, we have people here.”

Cornelius Carter, director of the department’s dance program, cited a recent partnership with the University of Roehampton in London, along with his teaching at the Victoria School of the Arts in Canada, Balletto di Civitavecchia in Italy, and Liaoning Ballet in China, as examples of how the department has grown since Carter joined the faculty 24 years ago. The department has gone from 35 to 155 dance majors with multiple alumni performing both national and international venues, he said.

Throughout the entire growth process, Rowand-Johnson remained untouched and additional spaces, like Morgan Auditorium, proved inadequate. Attempts in the mid-1980s and in 1999 to build new theatre facilities failed. “We’ve grown quite a bit, and we’re still in our same inadequate and outdated facilities,” Carter said.

The department’s two main performance spaces, the Marian Gallaway Theatre and Morgan Auditorium, pose significant issues: limited stage sizes, limited audience sight lines and limited scope of scenery—for example, no rigging system is in place to hoist scenery in the air. The facilities also pose issues with behind-the-scenes production, such as dressing rooms with access only via a spiral staircase or a virtually unusable loading dock, requiring all scenery and props to be brought in through the front entrance, Teague said.

But that all is about to change.

The transformation of the Bryce Main building and the creation of the brand new Performing Arts Academic Center are overdue additions to campus that Teague said will finally allow the department to dream big. “We’ll be able to fly.”

For Teague, who through his 36 years with the department was involved in previous attempts to update facilities, the finalized plans to join Bryce Main and the PAAC into new space for the department have been a long time coming.

For others, like Tricia McElroy, associate dean of humanities and fine arts at UA, it’s a process that required a two-hour history lesson when she first took the position three years ago. The lesson led her to a simple conclusion: “Given the caliber of our faculty and students, it’s time. It’s past time. The facilities that they’re using now in (Rowand-Johnson) and Morgan are woefully inadequate for the caliber performances we’re putting on and the caliber of students and faculty that we have.”

McElroy and Teague are part of a team of UA employees, architects and consultants who have been working for the last four years on plans for the new facilities.

Construction is underway on the Bryce Main building, which will include museum space dedicated to UA history and the history of mental health in Alabama, a welcome center from which campus recruiting tours will run, and classrooms and offices for the theatre and dance department. Construction on the 130,088-square-foot PAAC, which will hold performance spaces and be connected to Bryce Main, is tentatively set to begin in 2019,  estimated Tim Leopard, assistant vice president of construction. “It’s definitely a challenging project, but it’s also very humbling in the opportunity to save such a historic structure, something that’s so important to the state of Alabama, and preserve it for future generations,” Leopard said. “It doesn’t get to happen very often, so the project team is being very careful and very deliberate in how we approach the project.”

When all is said and done, he estimated thousands of hands will have touched the $60 million multi-phase project, which will require funding through bonds and charitable donations.

McElroy explained the purpose of the project as twofold: use as a laboratory and a welcome mat. “This facility on one really important level is a laboratory; it’s a classroom,” she said. “This is a facility that will be used 24 hours a day where students are learning to perform and operate (theatre) systems, so it’s a laboratory in that sense.”

To ensure the laboratory reaches its full potential for the University and its students, planning began with addressing issues and crunching numbers, noting the number of students that needed to be accommodated, the preferred size of the audience, etc. The team visited other, similar performance spaces at James Madison University and Notre Dame to weigh different options, settling on the current version about three years ago, Teague said.

From there, construction began on Bryce Main. Dan Wolfe, university planner, said the inside of Bryce Main is being redone into less choppy, more usable spaces, while the historic outside of the building remains intact, a construction feat by any standard. “You’re putting new construction together with a building that was completed in 1860, so there’s quite a dichotomy there of two different eras of construction,” he said. “In the end, it will make a building that is very usable for us as opposed to the one where your hands are tied.”

The new PAAC will connect to Bryce Main and contain a 450-seat venue for dance, a 350-seat venue for theatre and a flexible rehearsal space that could hold 275 people when arranged for a performance. “When you have 20 to 30 dancers in 4-foot tutus, you need a generous amount of space,” Teague said.

The extra space will prevent performers from crashing into walls if moving quickly off stage and allow audience members in the first two rows to see dancers’ feet—both issues in Morgan Auditorium, the third main performance space on campus. “The theatres are designed to do a lot of things with scenery that we can’t do now,” he added. “What we’re getting is vastly improved space, though not necessarily additional (performance) spaces.”

The west side of the PAAC will hold the dance theatre and rehearsal studios, while the east will house the drama theatres and the scenery production studios, he added. Parking will be more convenient, making direct access to the facility easier. Dr. Robert Olin, dean of UA’s College of Arts and Sciences, simply stated the new PAAC’s advantage: “It will finally allow our students to perform in a facility that matches not only their talent, but also the facilities that our graduates will encounter as they launch their professional careers.”

In addition to its use as a lab, the welcome mat aspect of the PAAC addresses the new gateway to campus the PAAC will be for prospective students, for theatre and dance students, for audience members and for the Tuscaloosa community. The new facilities will allow the department to continue its outreach in the community, including partnerships with local theatre programs, and further engage with state and national theatre initiatives, Teague said. It’s a sentiment that McElroy echoed. “I think the University, very valuably, is making a statement that the arts are providing ways of understanding being human,” McElroy said. “They are providing something important to both the University and the wider community. They’re advancing our knowledge, our appreciation for art, so I do think that by making the Performing Arts Academic Center a priority, the University is saying the arts do matter, that they’re valuable both in terms of research but also in terms of the joy and the beauty that they bring.”