The Elephant in the Trunk 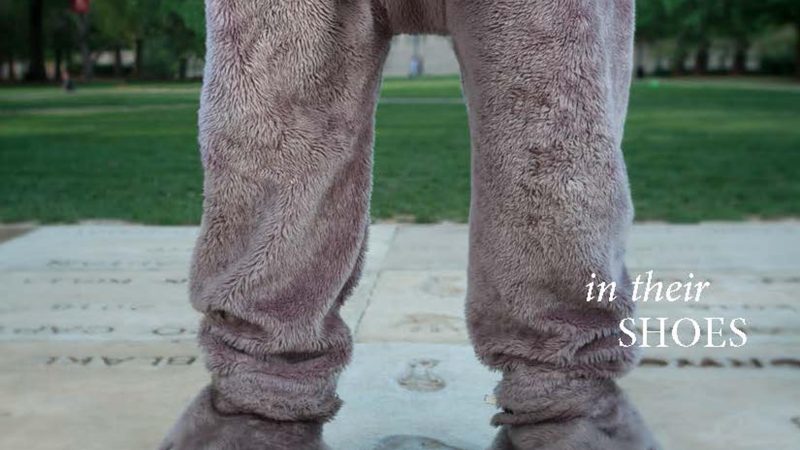 As he was making his way down to Dothan, Alabama, Hugh Dye had a few things on his mind. He had just finished his finals for the fall 1979 semester and was daydreaming of sleep, first and foremost, and reuniting with his hometown friends after the finals fog had faded.

As he zipped along U.S. Highway 231 in his Mercury Bobcat—with its large glass hatch on the back—he began noticing the stares and inquisitive eyes of passing drivers on the four-lane road that weaves its way south from Indiana to the Gulf of Mexico.

He didn’t think too much about it until he stopped at a gas station. “I stopped to get a Coke and walked around my car to get in the front, and that face was right in the center of glass,” Dye laughed. “I thought, well, no wonder people are staring.’”

Those curious Alabama drivers had just become the first to see The University of Alabama’s new mascot, Big Al, with his large elephant head staring at them through the back of the Bobcat.

For a mascot that now has his own introductory song played by the Million Dollar Band to welcome him into stadiums, Big Al had a rather unceremonious beginning. In the summer of 1979, several groups at the University came together and decided that it was time to give the school it’s own official mascot, which may or may not have been slightly influenced by the fact that Auburn University had created their own official mascot a few months prior.

Students had been wanting a mascot for quite a while, said Kathleen Cramer, then-cheerleading coordinator who retired as senior associate vice president of student affairs from the University in 2012. Cramer was one of the contingent working on the elephant’s creation. “Coach Bryant objected because he found elephants slow and clumsy, so the students passed a resolution saying they wanted a mascot,” Cramer said.

Student leaders and an alumni affairs representative went to meet with Bryant on the issue, Cramer explained. “He predictably said, ‘Thanks so much for your enthusiasm, but The University of Alabama doesn’t have a mascot and that’s the way I plan on keeping it.’ The student leader said, ‘Coach, if that’s true, then why do you have an elephant lamp on your desk and why are there elephants on the athletic tickets?”

Bryant ultimately agreed to the idea, Cramer said. Various incantations of an elephant had been worn to represent the University before, but this new official version, created by Disney in New York, most closely resembled today’s Big Al.

Although hesitant to try out for the role originally, Dye relented to the urging of friends and decided to compete for the gig. What he didn’t know at the time was that try-outs would be a pantomime performance in front of a panel and a crowd of students, as the pachyderm suit had not yet arrived. “I was petrified—I’d never done anything like that before,” Dye said. “I’d played sports in front of crowds before, but nothing like that. My GBA490 professor was on the panel, too, so I knew I was in trouble.”

Dye was the sole student selected to wear the suit, which was slated to arrive by Homecoming, but instead arrived at the Birmingham Airport at the end of the fall semester, just in time to debut at the 1979 Sugar Bowl. Dye would pick up the suit on his way home to Dothan following finals, it was decided. He didn’t think twice about the fitting a pachyderm into his car until he arrived. “I get to the airport thinking I’ll be able to pick up this package and be able put it in my car,” Dye said. “It’s actually in this crate that is at least eight or nine feet tall.”

Dye and airport employees cracked the crate open and there, on the sidewalk of the Birmingham Airport, Big Al made his Alabama debut before being stripped from the mannequin and stuffed in the trunk.

They say an elephant never forgets, but since Big Al is forbidden to speak, no one will ever know if he remembers his bumpy ride in the back of Dye’s Bobcat. But if he does, he certainly doesn’t carry a chip on his shoulder. Big Al is happy-go-lucky, fun-loving mascot, said Jennifer Thrasher, two-time Alabama graduate and former cheerleader who is now the coordinator of spirit groups. Today’s Big Al operation consists of five students, each with their own suit to accommodate the more than 400 appearances Big Al makes each year.

To land a spot as Alabama’s beloved Big Al, students interview with Thrasher before they even demonstrate their in-suit skills. “I want to make sure this is someone who will be a good ambassador for the University—a positive representative,” she said. “When they go to an appearance, they’re by themselves. The first impression people get is not who Big Al is, but who that student is.”

While 85 of those 400 appearances are required athletic events—all football games, men’s and women’s basketball home and postseason games, and gymnastics and volleyball home games, the remaining 300-plus run the gamut from countless other Alabama athletic events to weddings, birthdays and visits with children. “They have the ability to reach out and make the day of so many young kids—so many sick kids,” Thrasher said. “We’ve had so many sick kids whose wish is to see Big Al. There’s been experiences where (the students) told me they were in tears and glad nobody could see through the suit.”

While some events, like football games, require constant movement from the mascot and extreme coordination between all five team members to ensure that no one is in the suit for more than an hour, others are much quieter and much calmer, like the visits with children. “We had a little girl last summer who has since passed away, and all she wanted to do was rub the fur,” Thrasher said. “So Big Al sat there and let her do that as long as she wanted to do it.”

Justin Sullivan, who spent five years with the organization between his undergraduate and graduate careers, said that these calmer, quiet moments are the memories that are the loudest memories.

He participated in a wide variety of events as Big Al: multiple national championships, performing a coordinated dance at a wedding, traveling to New York City to participate in ESPN productions and performing in the Country Music Awards and in a music video for a Brad Paisley song Country Nation, to name just a few. But, his favorite memory is starkly different. A family friend requested that Big Al surprise a child who was losing his sight. “His parents wanted him to see Big Al before he lost his vision,” Sullivan said. “I knocked on the door, and he answered. The appearance was not jumping around—the little boy just sat in my lap for an hour. His parents cried, and I had crocodile tears in my eyes in the suit.”

After a pit stop in Dothan for the holidays, Dye packed up the pachyderm once again to head to New Orleans where Big Al would make his official debut—this time in front of a stadium full of screaming Alabama fans ready to cheer the Tide on to a national championship at the 1979 Sugar Bowl. It would be the only football game where Dye wore the suit as he was going to graduate in the spring.

The debut didn’t come without a few snags, though, as Dye’s roommate had to engineer a coat hanger contraption to secure the head in place and Dye had to learn to not only to maneuver in the suit, but maneuver inside a refrigerator box—the method used to get Big Al onto the field for his presentation. When the box came off in the center of the field, a semester’s worth of anticipation came to a head. “I had all these ideas of what I was going to do, and I didn’t do any of them,” Dye laughed. “After five minutes, I realized this was the most fun I’ve ever had. People were so positive and kids were so excited. It was really such an experience.”

While the exterior of Big Al may have changed in the four decades since Dye originally wore the suit—the wool sweater he originally wore was not conducive to avoiding a heat stroke and the Big Al contingent has now multiplied by five— but the spirit of the mascot is still the same. “This is not about yourself, it’s about the University,” Dye said. “I was hoping and praying that there was a legacy there for Big Al, and that it would become part of the institution.”

Over the years Big Al has become a vital part of the Alabama tradition. “I love the students who are involved with it,” Cramer said, “but also that it was a gift to Alabama’s legacy. It means a lot to me to have a role in this.”

While Big Al is recognized universally as a symbol of the Capstone, to Sullivan, Big Al’s legacy changes with each and every fan, supporter and alumnus.