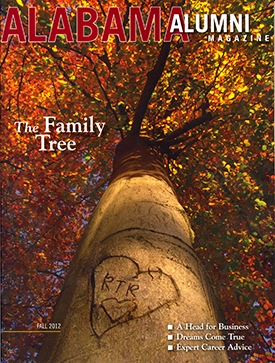 To be part of a family business, you have to be in the business of family, because sharing a company is much more intricate than sharing a last name. Success relies on a common bond of dedication and determination over decades, and passing traditions and skills across generations.

Furniture sales weren’t the original goal of James Spiller, founder of Spiller Furniture and grandfather to the company’s now-president Shane Spiller, a 1995 graduate of The University of Alabama with a degree in management and former Big Al mascot. In fact, when James was starting out in 1948, the company’s focus was mostly on moving furniture.

But when customers paid for moving services with extra furniture that they could no longer use, over time Spiller gained an unexpected stock of unwanted items. Just as the business was expanding, however, a devastating flood damaged his inventory and set business back. “My grandfather decided to run a water damage sale, and he actually had a lot of success,” said Shane. “He began to purchase new furniture to sell, and took the business in a completely new direction.”

In post-war times, his grandfather’s company sold on credit, something many others weren’t doing. And by providing a route business and establishing accounts in and outside of the Tuscaloosa area, Spiller Furniture continued to grow.

Today, a once 20-foot-by-75-foot space has expanded to 13 locations in two states, and has been passed down in the family for 64 years. When third-generation owner Shane Spiller became president in 2004, he took over for his father, Mike, who had served in the role since 1982. “My father and I have a great relationship, and I still lean on him. He was instrumental in the growth and success of Spiller Furniture,” said Shane.

Mixing business and family seems second nature to Shane, who was well-versed in company procedures even before graduating high school. He joined the family business in 1989 at the age of 16, and moved to full-time hours after graduating from UA.

“You can’t have your feelings on your sleeve when owning a family business. You have to be accountable, open, honest and able to accept criticism and correction from a family member,” he said. “We ‘keep the main thing the main thing’ and don’t let the business run our lives.”

A father himself—to three sons, no less—Shane said that even around the dinner table the topic of business is “never really off.”  His young children are already asking questions about it. Shane, his father and his sons are all featured in the company’s advertisements. “The family aspect adds a lot, and people pay attention to it. My father and grandfather worked hard to give me the chance to continue the family business,” he said. “If my boys want to continue the business, it will be their decision to do so. I want them to enjoy whatever they do in life. If it happens to be Spiller Furniture, then I will certainly support them.”

According to Shane, though, at Spiller Furniture family isn’t just defined by bloodlines. The business’s success, and why Spiller is dedicated to its legacy, can be attributed to the important relationships with customers and employees that have had as much staying power as the furniture company itself.

“We’re all connected and interrelated because of our livelihoods. It’s a big cycle,” said Shane. “We have a lot of repeat business because our customers are generational, too. And many of our employees are long-term. Some have been with us for more than 35 years. When we work as a team to meet our customers’ needs, we create loyal customers who enjoy bringing their friends and family to shop with us.”

The company’s core values, centered on dedication, initiative and accountability, play a prominent part in Spiller Furniture’s culture. “We aim to play an active role in the community, like special policies we provided to tornado victims and lending our delivery trucks to Holt Elementary School to help with tornado cleanup.”

With 64 years under its belt, the family business remains strong, Spiller said, even with the recent economic downturn and the growing popularity of online shopping. “When buying online, shipping is high and returns are hard,” he noted. Not so at his store, whose mission is the same today as when his grandfather was in charge, he said. “We’re helping people establish credit and giving them a chance to buy furniture. Our secret is simple: a high level of customer service that is friendly and caring.”

More than 100 years ago, Turnbull Bakeries was already alive and well, led by UA alumna Katy Turnbull’s great-grandfather and driven by a one-of-a-kind idea.

While at the 1907 World’s Fair, W.W. Turnbull observed people enjoying ice cream out of cones that were homemade from rolled, flattened waffles. He decided the process for making the cones should be easier, and invented the world’s first ice-cream-cone-making machine. The newly formed Turnbull Bakeries sold not only the cone-making machinery, but also pre-made cones. By mid-century, the company was running factories in Chattanooga, Tenn., and New Orleans, La.

During the 1970s, under the direction of second-generation owner Francis Turnbull, the company was producing a variety of baked goods, but decided to shift its primary focus to Melba toast, a thin, crispy bread often served with soup and salad. It was somewhat of a culinary oddity; at the time there were no Melba toast manufacturers in the South.

“Even today, only one other company is producing Melba toast,” said Katy, now director of administration and sales support for the business. “My grandfather invented his own machine for making Melba toast and, though refurbished, those same machines are being used at the factory today. While other companies have abandoned the original process, we still use the exact same baking process as we did back then.”

Katy recalled eating “hot Melba right off the line” as a child, and observing the charming business skills of her grandmother, Elizabeth, who took over the company upon her husband’s death in 1975 and headed the New Orleans location for 35 years. “My grandmother was an amazing and inspiring businesswoman, and was always dressed to the nines. She demanded respect and took the company to new levels,” said Katy. “The business was her life and she loved it, and she always wanted the family to continue the tradition of making Melba toast.”

When Elizabeth’s health began to fail and running the business became challenging, the family sold two of its Tennessee plants, but the New Orleans location closed up shop. “It broke her heart to watch her legacy close, and she died just two months afterward, in March of 2010. Her life made such an impact that even her AC man and her pool man came to her funeral,” Katy said.

That same spring, Katy received her degree in journalism from the University and, much to even her own surprise, she decided to reopen Turnbull Bakeries along with her father, Wayne, and sister, Whitney, just six months after its closing. “It’s always interesting working with your family, especially having your dad as your boss,” she said.  “But we keep it professional and get down to business. There’s a lot of camaraderie and teamwork, because we’re all in this together.”

Even though she grew up surrounded by the bakery business, and has known some of the current production workers since she was a baby, Katy is now learning things she never knew before. “Part of why I love what I do is because I do a little bit of everything, and get to see the creation process from start to finish,” she said. “It’s not just an office job; there is a hands-on approach. Because we run a small family business, I am exposed to lots of different aspects of the company.”

While Turnbull Bakeries is currently focused on selling Melba toast to restaurants and school systems, Katy said she’d really like to get back to the retail side. For starters, she’s selling Melba toast and “Melbanatic” T-shirts on the company’s website. “I’m carrying on what my grandmother poured her heart and soul into, and that’s a good feeling. It’s a way of not letting the story end.”

For Hunt Mobley, a 2005 UA graduate with a degree in management, running a custom men’s clothing store is quite the experience, both for him and for his customers. “I’m building off relationships formed by my father and grandfather,” he said of heading Mobley and Sons in Mountain Brook, Ala., which has been in the same location for 35 years.

Started in 1969 as the Varsity Shop in Tupelo, Miss., by Hunt’s grandfather, CD Mobley, the business has seen many locations and has involved many family members.

In 1977, the Mountain Brook location was opened by Hunt’s father, and in 1984, his grandfather took over that store while his father opened a new store in Memphis, Tenn. His aunt, Jan Mobley Rice, a 1978 UA graduate, is even involved. She runs the Canterbury Clothiers attachment at the Mountain Brook store, which offers women’s lines.

“We still have some customers who have shopped with us since the business opened,” said Hunt. That’s because owning a store like Mobley and Sons means assisting customers on a type of clothing lifecycle, he explained. “We develop great relationships while our customers are students at the University, for example, and often take care of them throughout their careers. Some who shopped with us in Tuscaloosa while in college moved to Birmingham and now shop with us here.”

When Hunt was a UA student, he worked with his uncle at the store, and it provided his “first real taste of the professional level,” he said. “In 2005, I joined my grandfather in the Mountain Brook location for my first retail Christmas experience and have played a big role here ever since. I enjoyed working with him, and it was very valuable.”

In 2007, CD retired after spending more than 60 years with the business, and Hunt took over as a fourth-generation retailer. “I got that itch,” he said. “It’s just in my blood. Both of my great-grandfathers were actually general merchants, too.”

In a time when gaining a following generally refers to social media sites like Twitter and Facebook, Hunt insisted his store has a following, too. “We’re providing an actual experience, because the industry we’re in is so hands-on. Customer service and personal attention are important,” he said. “We know our customers so well that wives come in and ask what to buy their husbands for Christmas.”

Still, with changing times come changing trends. “In general, attire has changed, so we offer more sportswear than we used to. Suits are still a big part, though,” he said. And with the advent of more casual dress, the buying process has become more casual, too. “Online business isn’t a focus for us, but it’s a nice additive,” Hunt said. The company has a website, a Facebook page and an online catalog, but he maintains that the personal aspect of his business is still key. “It’s great to hear stories about my father and grandfather from customers. My dad dressed these men for their weddings, and now I’m dressing their sons.”

Though his father is retired from the business, he and Hunt touch base regularly. “He’s like my consultant, and I refer back to him often. But we don’t really talk about business outside of work. Instead, we enjoy true family time.”

As for his decision to join the family business, Hunt couldn’t be more happy with how it turned out. “I’m proud of the store and the direction it’s headed, and I just wanted to continue the legacy.”

Katie Crawford, ’07, is the content master for Daxko, in Birmingham, Ala.