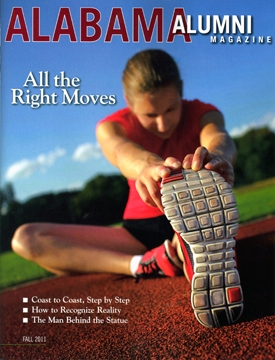 When it comes to diet and fitness, big success stories result from little choices, one day at a time.

Olivia Ward may have walked away from NBC’s The Biggest Loser as the winner, with a $250,000 prize in tow, but it was the 129 pounds she left behind that gave her the victory and a new outlook on life. Olivia earned the title of “Biggest Loser” over her younger sister, Hannah Curlee, who finished in second place after losing 120 pounds.

While there was friendly sibling rivalry  between the two University of Alabama graduates, there were more support and love than anything else. Olivia recalled, “When we made the final four, and then found out we were in the final three, it just felt like we had already won. The rest became about finishing strong.”

When Olivia, ’99, and Hannah, ’03, decided they wanted to compete on season 11 of the popular reality series, which features people competing to win a cash prize by losing the highest percentage of weight, they knew they’d have the chance to change their lives. What they didn’t know was that they would change their entire family’s lives as well. “It’s funny, because when we first got on the show, we were so desperate for change,” Hannah said. “We had been trying to get our parents to lose weight for years. Looking at our family, we were all at our heaviest.”

It all started with a single phone call. Olivia was living in New York City, working as an opera singer, when someone saw her picture through a friend’s Facebook page. It turned out that person was on the casting team for The Biggest Loser. Olivia received a phone call asking if she’d ever thought about being on the show. She hadn’t, but it sounded like a good opportunity. With her husband, Ben, she left for Chicago to take part in the casting call, where they were both interviewed and shared photos from their daily lives. Among the family shots, the team saw something that interested them.

“Olivia and I are so close, so I was in a lot of the pictures,” Hannah said. When the casting crew asked about Hannah, Olivia phoned her sister. “They called me and I said, ‘No way, José. No way am I ever going to get on TV in a sports bra and hot pants,’” said Hannah, referring to the spandex workout clothes typically worn by contestants during televised workouts and weigh-ins.

Olivia and Ben poked and prodded, and finally convinced her to join them in Chicago for the weekend. “It’s one thing to do it with a friend or even a spouse, but a sibling—if you have a sister, you have a best friend for life,” Olivia said. “I’m so glad she did it with me.” They were two of 100 contestants who reported to California, and they made it through to the final 22 in order to take part in the filming.

Olivia and Hannah were a little different from the other contestants right from the start. “We were two of the only people who weren’t uber fans of the show,” Olivia said. “Right before the first weigh-in, everyone else was water-loading and eating fast food. We didn’t really know how to play the game at first, but we wound up winning.”

Both women learned quickly. Out at the Biggest Loser Ranch, Bob Harper, one of the show’s trainers, talked to contestants about changing their environment in addition to themselves. Hannah and Olivia took the advice to heart. Over the show’s two-week Christmas break, Hannah had a long discussion with their parents. “It was very hard, but it was the best thing I ever did,” she said. “My parents got active. Everybody is really transforming.” The difference in the Curlee family is easy to see. Since that holiday meeting, their dad and mom, Keith and Betsy Curlee, have lost 75 pounds and 60 pounds, respectively. And their youngest sister and fellow Alabama alumna, Norah, ’07, has shed 90 pounds. “This show—this experience—changed our entire family,” Hannah said.

It will change their future as well. For Olivia, earning a clean bill of health at the end of the show was one of the most exciting results. At 35, she was motivated to lose weight in large part by her desire to start her own family with Ben. Now, she’s where she wants to be. “I’m such a better version of myself,” she said. “Not only am I going to be healthier, but I feel like I have these things I can pass on to my kids. I know that The Biggest Loser will be a huge part of not just my life, but my children’s lives and my children’s children’s lives.” And there’s been yet another positive result. Although Ben wasn’t chosen to appear on the show after their casting call, he nonetheless lost 113 pounds in an effort to support his wife during the competition.

Since the show ended on May 24, 2011, Olivia and Hannah have turned their attention to helping others turn their lives around. They are quick to point out that the desire to change and the smallest of starts can catapult anyone into their own fitness journey. “It just takes one small choice to get you started. Just one,” Olivia said. “You don’t have to decide you’re going to lose 129 pounds; that’s not what it’s about. If you try to do that, you’ll be so overwhelmed by lunchtime, you’ll quit and go to Guthrie’s.”

One of the best ways to begin is to do some research on your surroundings, and find a gym. Don’t even worry about food that day, Olivia recommended. “Over a few weeks, if you make small choices, you’re in a full-fledged healthy lifestyle and you’re losing weight.”

The mental battle is one of the most important, she continued. “I always defeated myself mentally before I got started. I thought ‘I’ll do this diet. It’s not going to work, but I’ll do it.’ And then I’d wonder why I got on the scale and nothing had happened.” A person’s mind plays a huge part in how their body responds, she explained. “Once you can really get control of your mind, the rest is just science. Calories in, calories out. Once I was able to trust myself, the weight just came right off.”

For Hannah, the weight loss journey changed everything. “I’m a different person,” she said. “It’s phenomenal how your life can turn out when you are dedicated to change. Before, my daily life was, ‘Get up, go to work, eat behind my desk, come home.’ I kind of became a homebody because I was so ashamed of who I was.” Her Biggest Loser experience led to the exact opposite outlook. “Now, Olivia and I are all over the place, with magazines and TV shows, and I work with HCA’s [Hospital Corporation of America’s] wellness division, H2U. I’m promoting our website now, and it’s kind of funny—if I had used this before, I might not have had to go on the show.”

Hannah is quick to point out that asking for help is one of the best things to do. “Whatever you’re trying to do, it’s important to ask for help and ask for support,” she said. “And making the decision to start your journey is the most important thing.”

In July, the sisters started a blog, at myfitspiration.com, to share more details about themselves and their lives full of “fitness, fashion and fun.” Connecting with their fans and opening up about their struggles after leaving The Biggest Loser is something they are both enjoying. “The most important thing about us is that we are normal people who still have weight struggles,” Hannah said. “I missed out on so many things because I let my weight control me. Even if you’re overweight now, you can’t miss out on life because of what your body looks like.”

Hannah’s advice to readers looking to take control of their lives is simple. “Don’t wait until tomorrow. Do it today. Don’t wait for the next Monday, or for the next holiday to be over,” she said. “You deserve to make the right decision for yourself.”

Olivia and Hannah aren’t the only UA graduates using new platforms to encourage healthy living. Jenny Enslen Stubbs, ’01, has combined her communications degree with her interest in health and physical fitness to give the residents of Montgomery’s River Region a new tool for their well-being. In July 2011, Stubbs debuted the River Region Health & Fitness magazine, a free, bi-monthly publication dedicated to improving the bodies, minds and lives of its readers. It features articles on fitness, health, sports and leisure activities.

Stubbs’ journey from college graduate to publisher of a magazine has taken her quite a few places. “I always wanted to write, and I had just changed my minor to creative writing in college when I found out I was pregnant,” she said. Stubbs and her husband, Troy, had been married for just five months at the time. “I actually graduated from the College of Communication eight months pregnant,” she said.

The couple stuck around Tuscaloosa for another year so Troy could earn his degree in international finance in 2002 before they moved to Memphis, Tenn., where Jenny got her first taste of working with a health magazine at Memphis Health and Fitness. A career change for Troy, from business to coaching, took the couple to Louisville, Ky., where Jenny worked with Kentuckiana HealthFitness magazine.

In 2010, they moved again, this time to Jenny’s hometown of Wetumpka, Ala. That’s when the idea for her own magazine began to take shape. “Once I got here, I was surprised that there were no free and accessible health and fitness publications,” she said. “I quickly learned that Montgomery and the River Region were polled by Gallup and found to be the most obese city. That’s what really propelled me forward with this idea.”

As it turned out, the River Region had quickly made strides to change  after being labeled as the nation’s weightiest. The area had always been a popular location for health races, but the number of events has almost doubled in recent years. There are now close to 40 races taking place annually. “Recognizing that need helped me decide to establish the magazine, but I also wanted to feed a want,” Stubbs said. “In other cities, there are these established venues of racing—adventures races—and I could tell that things were just beginning here and starting to grow. To see these health and fitness events on the upswing, I wanted to provide the public with information coupled with events.”

With more than 10,000 copies printed per issue, River Region Health & Fitness is available throughout the region, and can be found in many locations, from Publix shopping centers to coffee shops to libraries. There is also a noticeable presence at races across the region, to provide what Stubbs calls “that direct link to our readers.” As more and more people become acquainted with all the magazine has to offer, Jenny sums it up best as “a one-stop resource for the community, as far as health and fitness education goes.”

For her, providing people with the information they need to better their lives is worth the effort. “The whole purpose of the magazine is to show that health and fitness aren’t chores. They’re enjoyable,” she said. “In this region, we have so many recreational resources. We really have kind of lost touch with our bodies and what helps us achieve good quality of life. Once people recognize how interrelated health and fitness are with their overall quality of life, that will help make a difference.”

What it all boils down to is the magazine’s mantra, printed prominently in every issue and on its website: “Be inspired. Be educated. Be active. Be healthy,” Stubbs said. “People are in different stages of health and need different things,” she added. “But our ultimate goal is the same—to be healthy and enjoy our lives.”