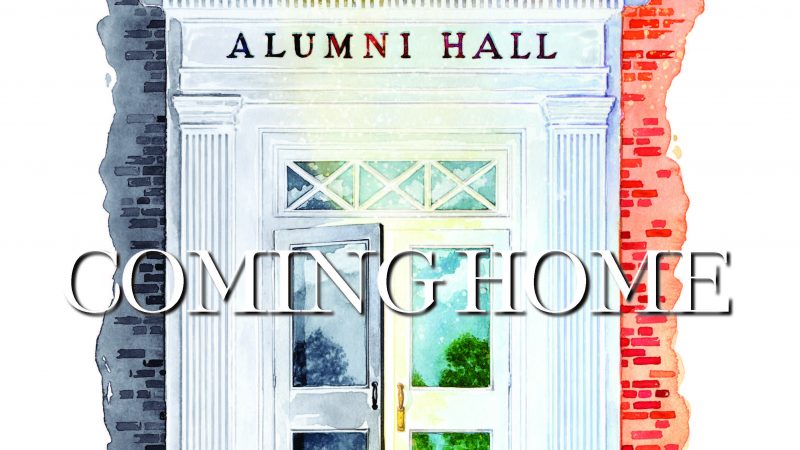 With more than 9,000 students graduating each year, there are now more University of Alabama alumni than ever before. As the number of alumni has grown, so too has the National Alumni Association, to where the existing Alumni Hall is no longer practical. So the association is planning to move, into a new building along Campus Drive, where it will be able to grow with the University in the future. The new Alumni Hall will be a place for alumni and fans to gather, to remember and to celebrate. It will be a place for potential students to discover why The University of Alabama is so special. And for the National Alumni Association, it will be a forever home—for we are coming home.

Since 1949, the University of Alabama National Alumni Association has had a home on campus. In its first incarnation, the association was housed in Temple Tutwiler Hall for almost 40 years. While at Temple Tutwiler, returning alumni resided in its walls for short stays to reconnect with the Capstone. In 1987, the association moved into what is now known as Alumni Hall, next to the Bryant Conference Center.

But as the University continues to grow and the graduation numbers increase, the association found that it was rapidly expanding without enough resources or space to keep up. With more than 200,000 living alumni and 34,000 active National Alumni Association members, the association has outgrown its 18,000-square-foot building.

After being named director of alumni affairs in 2011, Calvin Brown quickly realized the association needed a bigger space that could not only house all the staff, but also would be welcoming to alumni and could host events without issue. It became a goal of his for the NAA to build a new place to call home. “I want this building to be iconic,” Brown said. “I want it to stand out to students and alumni and put us on the map.”

It didn’t take much to get Bob Pierce, vice president for advancement, on board. Pierce had heard of and seen other alumni association facilities at campuses across the country. He knew it was time.

Soon after Pierce came to UA in 2015, he and Brown were in talks trying to determine where the new building could go, what the association needed and what the cost would be for such an endeavor. It was no easy task to find a spot on campus, especially since the University has grown rapidly over the past 15 years.

As the search continued for the perfect location, both men agreed it needed to be in a spot that was easily seen and was at the heart of campus. The current Alumni Hall is often mistaken as a secondary building of the Bryant Conference Center or overlooked completely. It was time for Alumni Hall to stand out.

Soon after, the perfect location was found: on the Peter Bryce Campus.

The new location, facing Campus Drive on the Bryce property, is nestled in a pecan grove. It will stand on its own, without any adjacent buildings crowding it. Although not along the drive leading up to the new Performing Arts Academic Center, the new Alumni Hall will sit adjacent to Bryce Lawn, near one of the commuter parking lots located across Campus Drive from the Recreation Center.

“This facility, without question, is going to make a statement, not only about the quality and value of the alumni association itself, but also the importance of the role our alumni play in the life of the institution,” Pierce said. “The facility will be a home for UA alumni, meaning that if they’re coming back to campus for any reason, a) we want them to come see us and b) we want to create events and programming within the facility that encourages people to visit. So it’s going to be a wonderful advancement for us.”

Taking notes from other buildings on campus, architect Courtney Pittman of Davis Architects in Birmingham had a vision for this project. She knew she wanted to recapture the style found within the Bryce property and keep with the historical look. Her firm helped design multiple buildings and projects on campus in recent years, including the renovation of Coleman Coliseum. Pittman was excited to design the association’s new home.

After hired in early 2017, the architects designed a building fit to be on campus while still meeting the association’s current and future needs.

“We wanted Alumni Hall to feel like home when you came to campus as an alumni or fan,” Pittman said.

Space was, of course, the biggest requirement for the new project, as the association needs a bigger building for not only its staff but also for any alumni function. In the current building, executive committee board members and staff cannot fit in the conference room comfortably; instead they line chairs along the walls to squeeze everyone into meetings. Staff are also running out of space to keep up with the demands required due to growing association membership numbers.

Along with more room for staff and executive committee members, Brown said he wanted to have event space for functions, instead of renting out buildings on campus or in Tuscaloosa. By bringing all functions back into the new Alumni Hall, alumni will be able to reconnect with the University, he said.

At nearly 49,000 square feet, the association’s new home will be iconic. Like other halls on campus, the building will have the signature red brick façade and two-story columns at the front. At the back, columns will wrap around the building, creating a portico surrounding the new courtyard. A vestibule will be one of two main entrances into the hall, and large windows will bring in light.

The centermost part of the building will be three stories tall, with the first two levels dedicated to association staff. The third story will house the University’s office of development, in an effort to streamline communication between the two departments. The sides of the building are what Pittman and her firm call one-story “knuckles.” One knuckle will house the alumni publications department and storage facilities, and the other will be the entrance to the new ballroom and foyer for events.

It may sound extravagant, to go from 18,000 square feet to almost 49,000 square feet, but the building will be everything the association curently needs and will allow growth in the future, Brown said.

On the inside, the lobby will be wrapped by a grand spiral staircase, and the space will feature classic but clean architectural lines. It will be warm and welcoming with plenty of space for guests. A stately door on the back of the lobby will lead out to the courtyard, Pittman said.

The new building will also feature a museum-like gallery that will showcase the association’s history and the evolution of The University of Alabama that will be open to the public. There will also be a wood-lined parlor where visitors will be able to meet, and an executive office, which will be used for important one-on-one meetings.

Unlike the conference room in the existing Alumni Hall, there will be two conference rooms in the new building and a much larger boardroom for executive committee meetings.

Another big change is that the new Alumni Hall will feature a ballroom that can accommodate approximately 400 people for seated dinners. Leading into the ballroom, there will be a ballroom lobby, which can be used as pre-event space.

Glass French doors in the ballroom will look out onto the courtyard, which opens directly to the pecan grove that will surround the building. With ample seating and space, the association will be able to host outdoor events as well, Pittman said.

The second and third floors will be reserved primarily for offices and conference rooms for the alumni and development staff, with room to grow in the future. But, as architects designed a space to meet the current and future needs of the NAA, they wanted to tie the building to the past, too. As homage to the original Alumni Hall, a replica of Temple Tutwiler Hall’s door will be placed on the balcony of Brown’s office, which overlooks the courtyard.

“It has the best view from the building,” Brown said.

As many alumni can attest, the Capstone is often home during a pinnacle time in their lives. Anyone part of the National Alumni Association knows the Capstone and the staff of the association are always in their corner, ready to lend a hand or welcome them home.

Throughout the planning stages and the beginning of fundraising endeavors, NAA President Chad Coker has been supportive of this next step. Although Coker won’t be the president when the building is completed, he is looking forward to celebrating this moment in alumni history. “I think it’s a great opportunity for the National Alumni Association,” Coker said. “As you recognize the tremendous growth we’ve had on campus with buildings and the students, it stands to reason that the National Alumni Association would as well. Our base of alumni will be growing at an exponential rate, so I think the building should be a place for alumni to return home.”

Linda Carmichael Thomas, who will become president of the association in April, said she is most excited to see construction begin and watch it come together. It’s a once-in-a-lifetime opportunity for her and the association, she said. “We’re a part of history being made, and I don’t foresee this happening again,” Thomas said. “It’s a forever home for the National Alumni Association.”

With construction slated to begin as early as this summer, Brown and members of the planning committee are hoping to be in the building by the fall of 2019.

But first, fundraising is underway. The project is expected to cost more than $21 million when completed. While the University is providing a significant portion of the funding, $8 million in charitable contributions must be raised before construction can proceed. “Our alumni and friends have always been generous and supportive of the National Alumni Association,” Brown said. “Their contributions are of vital importance.”

It is the new home for the National Alumni Association.