Cuisine of the Capstone 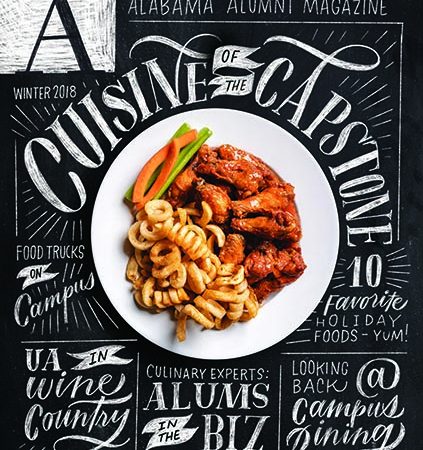 When most people think of their college years, they remember their friends, the campus, their classes—and more often than not—the food. College town grub is not usually the most high brow of delicacies, but instead the kind of cheesy, fried or sweet tooth foods that fill the stomach and nourish the soul. It is the kind of cuisine that makes us reminisce about a time gone by—what we ate, who we were with and how things used to be.

Many of Tuscaloosa’s campus restaurants of yesteryear have come and gone—but not all. There are certain establishments—and certain iconic dishes (and drinks, of course) that seem to be constants.

When it comes to food, nothing beats Tuscaloosa. Here, we feature six dishes and one drink that are  synonymous with UA. Because when you are coming “home,” you must have cuisine of the Capstone.

A trip down memory lane

Founded in 1996 by former owner and current chef Gary Lewis, Rama Jama’s is the hotspot for quintessential game day food. Popular not just with alumni and  Tuscaloosa residents, it’s also a favorite of students. Michael Hebron, who bought Rama Jama’s in 2017, said it’s not just the burgers that attract so many customers, but also the breakfast, milkshakes and other treats.

Named after the Alabama state bird, Gallettes’ signature Yellow Hammer drink is in a league of its own. The rum-based, citrus cocktail has been around since 1976, and game day wouldn’t be complete without one. Thousands of gallons of the famed drink are served every week, game day or not. Because of the popularity, owner Jeff Sirkin and his team had to start mixing the cocktail in five-gallon jugs and serve them out of dispensers.

“I like the tradition of it, that it’s become a tradition. Not that Alabama football isn’t steeped in tradition, but this drink is now a part of that tradition. It’s become a game day tradition,” Sirkin said.

On an average week, Gallettes can serve 800 to 1,000 gallons of Yellow Hammer.  However, on a home football game weekend, approximately 3,000 to 5,000 gallons are served.

Gallettes recently renovated its historic location in the spring of 2018. Removing the large bar, the updated Gallettes has more open space for customers. The modern look appeals to locals and students.

Originally known as Wings and Things, Buffalo Phil’s is one of the most iconic restaurants in title town. The signature crispy buffalo wings with curly fries and a side of sliced celery and carrots have been around since founded 1981 by Phillip Weaver and then-partner Bob Baumhower.

Slathered in the famous secret recipe hot sauce, the wings are a hit for students, locals and alumni. Former Alabama football player Derrick Henry loved B-Phils so much that general manager Christian Pierce still remembers his order of honey barbecue wings or an American club sandwich.

“We’re pretty famous for our wings,” Pierce said. “We’re much different when it comes to our competitors. They have the bigger, jumbo kind of wings but with us, we’re really proud of the wings we have. They’re smaller wings but since they’re smaller, they’re more crispy and more  flavorful. The customer can really enjoy the flavor from the chicken as well as the hot sauce.”

Chef Cynthia “Red” Nox said wings are the staple at Buffalo Phil’s. On average, 25 to 35 40-pound cases of wings are ordered three times a week to keep up with demand. On game days or during big events on campus, more wings are ordered.

Anyone who’s been a student at the Capstone during the last two decades knows that the best place for a midnight meal is Quick Grill, located across from Buffalo Phil’s. Originally founded in the late ’90s, Quick Grill is a staple on the Strip.

The late night Mediterranean spot is famous for its messy fries. Topped with chili, seasoning salt and shredded cheese with a side of ranch, the fries are essential to living in Tuscaloosa.

Manager Zak Alwan and his family purchased Quick Grill in 2008, and have since renovated the small restaurant and made the hours more accessible for locals.

“It’s been quite a journey to say the least,” Alwan said. “The  previous owner would only ever open on Thursdays, Fridays and Saturdays from about midnight till around 3 a.m. or so. That means Quick Grill wasn’t even open during the week—it was  honestly hardly open at all.”

Seeing the bigger picture, Alwan said his dad opened the  restaurant six days a week and expanded the hours from 6 p.m. to 3 a.m. With time, the outside of the tiny restaurant was repainted and renovated. Business started coming in little by little, Alwan said.

“Our key goal was speed, because we had to live up to the name Quick Grill,” he added. “Now if you come to order food and you’re afraid of the huge line, worry not, because you get served right at the window when you order! How’s that for quick?”

Originally founded in Tuscaloosa, Dreamland Bar-B-Que is possibly the most popular barbecue in Alabama. After expanding to more than just ribs and bread, Dreamland now has an entire menu of barbecue goodness. Most notable on its menu are the stadium nachos, a signature dish at Bryant-Denny Stadium and many of the Dreamland locations.

“We wanted to have something unique, just for the stadium,” said Matt Kilgore, operations manager for Dreamland. “We decided to come up with the nachos. They’re handy and easy to make and to eat in the stadium.”

The University Club, which opened in 1944, is famous for classic Southern cuisine. Even more famous than the club itself is its signature dessert, the almond ball. Created in 1970s, the late longtime manager Alline P. Van Duzor was a stickler for this treat.

Dubbed the “perfect dessert,” the vanilla ice cream coated in almonds and rich chocolate is the best way to end a meal. It’s a serious business though, chef Cherri Koester said. Even the slightest change in size, consistency or flavor is noticed by guests, so much so that one person contacted the head of the College of Human Environmental Sciences and complained about the changes to the almond ball, making the club revert back to the original recipe a few  years ago.

“We’ve made a few changes to the recipe, but the members are very set with this is how it’s got to be,” Koester said. “If you make too many changes, it creates havoc. It is very serious. You don’t mess with the almond ball.”

Every day, one of Koester’s team helps scoop the ice cream and toss the ball into organically sliced almonds. The ice cream ball is frozen until the last second, when rich chocolate is drizzled before being presented to the lucky diner.

It’s a treat you don’t want to miss, along with the rest of the Capstone’s iconic cuisine.