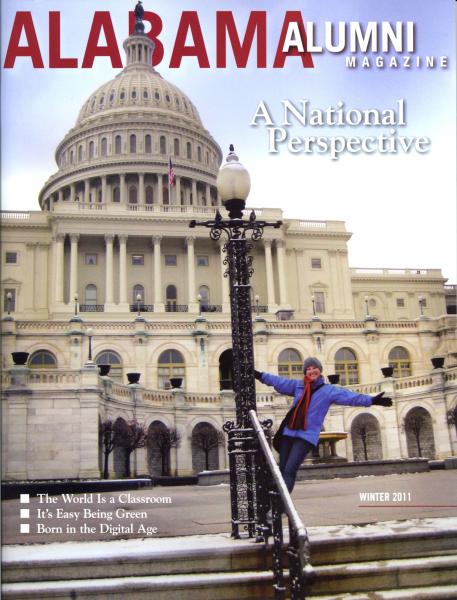 Social work interns trade campus for the District of Columbia, championing children’s rights inside the Beltway.

The story begins the same way for each of them. A group of students packs up and moves to Washington, D.C. They go to see the bright lights and historical sites of the city and to change the lives of the children around them.

For more than 30 years, students from The University of Alabama’s master of social work program have spent the spring semester learning and working in Washington, D.C. The internship is a full-time, 40-hour-per-week commitment, pairing students with innovative initiatives in order to prepare them for their future careers. While students head out aiming to make their mark on the capital city, they return changed themselves.

“The D.C. program really allows students to experience social work on a whole different level‚ from the perspective of our nation’s capital,” said Carroll Phelps, a UA instructor and the coordinator of the MSW’s Washington program. Many within the program choose to focus on children’s welfare, and D.C. provides ample opportunity for them to get an up-front look at where and how related federal policies begin. “In D.C., our students are working with agencies that are on the cutting edge, looking at how we as a nation take care of our children,” said Phelps. “What we are seeing here in Alabama and across the country are agencies that are really responsive to the needs of children. We have to be the advocate for the child. We have to make sure that each child has the resources he or she needs.”

Phelps, MA ’79, MSW ’98, has overseen the program for the past six years. She teaches a policy class each spring when she travels to D.C. with her students. She helps set them up with the programs and organizations for which they work, and said she couldn’t be more proud of the positive reputation they have earned for themselves, and for the University. “They are making a difference in the lives of people across the nation, and that is so rewarding,” she said.

The unique program has led to strong ties among its members. More than 500 of its alumni have continued on to careers in social work, and they continually reach out to the next generation of interns. “The alumni stay so involved,” Phelps said. “They go on to really great careers, and they stay connected to the program because it meant so much to them. They learned so much that they want other people to be able to experience it, too.”

The D.C. internship program celebrated its 30th anniversary in 2010, with events both in Washington, D.C., and on the University’s campus. With its reputation, interest has grown. For the 2012 experience, Phelps had to limit the number of participants; 22 will make the trip in January 2012. “There have been so many students that are interested and want to go, and that’s a really good problem to have,” Phelps said.

When David Laird, a 2005 MSW graduate, came to the University to pursue his master’s, he did so with the D.C. internship program at the forefront of his decision. “I knew from the beginning when I was looking at grad schools that I could go to another school, but only one could help me get a practicum in D.C.,” he said. “That sets Alabama apart. They have continuously dedicated resources to make this happen.”

Laird, who spent the spring semester of 2005 in Washington, interned in the Child Welfare League of America’s government affairs office. The CWLA is the nation’s oldest and largest membership-based child welfare organization, with a focus on making children and their welfare a national priority. At CWLA, Laird got an introduction into the world of children’s advocacy. “I learned about child welfare policies and how everything interacts,” he said. “I learned how federal policy affects practices on the ground.” It was an experience that would prove invaluable to him as he transitioned into the working world. He accepted a job as the CWLA’s program manager in government affairs after his graduation.

Eventually, Laird transitioned to a new job with another of UA’s internship partners. As the director of government affairs and policy at Voices for America’s Children, Laird continued his work for children. Voices is the nation’s largest network of multi-issue child advocacy organizations. The nonprofit, nonpartisan network spans the country, leading advocacy efforts at all levels and aiming to improve the lives of all children. His time there allowed Laird the chance to continue the child advocacy work he started at the age of 18.”  I was always compelled by the policy process and the belief that the lives of children can be improved,” he said. “It is an honor to be able to actually live my passion.”

In 2009, Laird left Washington, D.C., for his current job, as director of policy and governmental affairs for the Children’s Trust of South Carolina. “I knew they needed an individual to show some leadership to try to influence some change at the state level,” he said. “I saw this as the next challenge, with new opportunities.”

The Children’s Trust is South Carolina’s designated lead entity for the prevention of child abuse, neglect and unintentional injuries. Laird said he is lucky to be able to continue his work as an advocate for children with such a strong organization. “I have the privilege of working with our network of 46 community-based organizations in advancing effective public policies to our general assembly and our congressional delegation that will keep children safe, healthy and educated, and give them every opportunity to thrive.”

His ability to influence the lives of countless children comes directly from his Capstone experiences, he said. “I have been more than blessed to be in the right place at the right time and to have gotten my hand in some important child welfare legislation. If it wasn’t for Alabama getting us to D.C. and forcing us out of our element, that would not have been possible.”

Sarah Jones thought a degree in communications would provide a broad background and prepare her for life outside the classroom, so she pursued one at Rutgers. Just before graduation, she suddenly knew she was looking for something more. “I realized it wasn’t really what I wanted to do,” she said. “I knew I needed to switch directions. I really wanted to do something more genuine, where I could help facilitate change in the lives of people who truly need it.”

Her search led her to UA, and the master of social work program. “My brother was about to go to Alabama, and I was looking on the website and somehow stumbled upon the MSW page,” she said. “I read the mission statement and immediately knew that I needed to go. I didn’t even apply to any other schools, and I’ve never looked back.”

However, Jones was a slightly reluctant D.C. internship participant. “I had just made this move down South and I didn’t want to leave right away,” she recalled. After a few semesters on campus and a few talks with Phelps, Jones decided to give it a chance on the way to earning her degree in 2011. “I decided it was too good of an opportunity to pass up,” she said. “It ended up being a life-changing experience.”

During her internship semester, she worked with Washington Empowered Against Violence, better known as WEAVE, where she counseled victims of domestic violence and sexual assault. But with a concentration in children and family studies in her UA program, she really wanted to get back to working with children.

All the while, Jones was developing a deep affection for the city. “I ended up falling in love with it because we made such great connections while we were in the program,” she said. “I felt like it was the best place to get a job.” Almost immediately following her graduation from UA, she was hired by Sasha Bruce Youthwork, a group that meets the urgent needs of at-risk youth and their families in Washington. Jones said it’s an opportunity to do what she loves and to make a difference, as the field of social work grows and evolves. “I think, especially within the D.C. community, a lot of our work is becoming real proactive with children,” she said. We’re showing them a different way before they go down the wrong path. We’re focusing more on teaching and educating than on punitive programs, and that’s been a real shift.”

Dealing mainly with juvenile offenders, she has seen a shift in many areas of her work. One of those is intensive third party monitoring, meaning instead of a juvenile offender wearing an ankle monitor, Jones is part of a team assigned to monitor the child each day. “The idea is that a person can help the youth more than the electronic monitor can,” she said.

Most recently, she has been involved with a Sasha Bruce program called Kindred Connections, which partners with the Far Southeast Collaborative in D.C. “I work with families who are at risk for having their children taken away or are being reunified with them after they’ve been removed from their home,” Jones said. “I do a lot of counseling with the kids, and I do case management with the parents. But the parents are minors themselves, so we work on life skills and parenting classes, too.”

Jones said the transition from life as an intern to life as a professional social worker was an easy one. “I feel like it speaks to the Alabama program, because it wasn’t a rough transition going from my internship and classes to full-time employment,” she said. “The expectations are so high, and the way the program is set up is very much like what your work experience will be like.”

Not only are the UA interns in D.C. known for meeting those high standards, but the program is as well. “Organizations, especially ones that have had Alabama interns in the past, are always eager to get them again,” Jones said.

Soon a new group will join the agencies that await them, and while their stories may begin the same as Laird’s and Jones’, their work and that of their D.C. classmates will ensure that the life stories of thousands of children will change for the better.