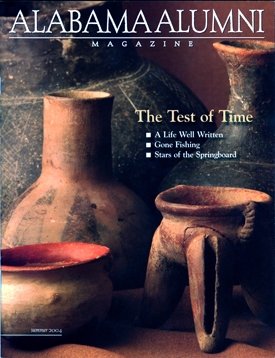 “Just as you cross the railroad tracks on the park entrance road, the mounds loom large into view. Seeing them for the first time, when I was an undergraduate, made a huge impression on me. I’m still impressed by that view.” Dr. Vernon J. Knight, anthropology professor at The University of Alabama, encounters that view every time he enters the Moundville Archaeological Park to teach his undergraduate class in field archaeology, one of the many connections between this world-class historical site and the University.

The mounds that loom into view are over two dozen grass-covered hills on a 326-acre patch of ground lying on a terrace overlooking the Black Warrior River. The entire complex is a 30-minute drive south of campus. Although 21st-century activities circle the perimeter, the central plaza is a quiet, open space. It has a formidable but abandoned air—a sense of great activity long past.

The mound builders began around 1000 A.D. to construct earth piles of various sizes as building platforms for ceremonial centers, houses for the upper class and other purposes. In its heyday, Moundville—we have no idea the name the original inhabitants used—housed 3,000 people and accepted tribute from over 7,000 people in the Greater Moundville Metropolitan Area. Along with the Cahokia site in Illinois, Moundville was a centerpiece of what scholars term the Mississippian Culture. By the time DeSoto came through the state in the 1500s, Moundville had declined and the mounds were in large part abandoned, although the flat areas were used for farming through the 20th century.

The Moundville Archaeological Park is designated by the National Park Service as one of 32 National Historic Landmarks in Alabama, which is a higher level designation than the National Register of Historic Places. Although not yet named a World Heritage site, Moundville has been designated by the U.S. Department of the Interior as eligible for this distinction, and it is the only site in Alabama that has been deemed eligible.

The first professional excavator of the site was Nathaniel T. Lupton, who later became president of the University, 1871-1874. Material excavated from Moundville over the years covers the span of human activity, from hunting to eating, from building houses to burying the dead. Much of the material is on display or stored at Moundville, but many objects left the state before the importance of the site was appreciated.

In the 1930s, two Alabama state geologists, Eugene A. Smith and Walter B. Jones, “guarded the site of Moundville with their prestige and with their personal funds—in one instance even mortgaging his [Jones] family’s home to purchase part of the site,” according to the forward of the book Archaeology of the Moundville Chiefdom. Smith graduated from UA in 1862 and went on to become a professor at the University and founder of the Alabama Museum of Natural History in 1910. Smith Hall on the UA campus is named for him, and houses the Alabama Museum of Natural History. Jones became the director of the museum and the namesake of the Jones Archaeological Museum at the Moundville site, then called the Mound State Monument. The name was changed in the 1990s to Moundville Archaeological Park to better reflect the aims of the park and to prevent confusion with state parks and even with cemeteries from the “Monument” part of the name.

Today, the Moundville Archaeological Park is one of five University Museums, and is a branch of the Alabama Museum of Natural History. The University’s field school class gives undergraduates, both anthropology majors and non-majors, “a taste of what it’s like to be on a real dig,” says Knight. The work is part of legitimate scholarly research, he said, and not a make-work program for students. Many anthropology students who want more than a taste of the experience have archaeology-related jobs at the Office of Archaeological Research. Each year since 1993, one promising anthropology student is awarded the David and Elizabeth DeJarnette Scholarship for research at Moundville.

The scholarship was started by DeJarnette’s daughter, Sarah “Sally” Lavanda DeJarnette Caldwell, to continue the research and work done by her father. Caldwell literally grew up in the park, at the heels of her father as he excavated and researched—her family lived at the park during the years her father worked there. She went on to attend UA, graduating in 1962 with a major in history and a minor in English.

Some children take their situation for granted, but Caldwell said she always felt that the park was a beautiful place to live and that “it was always impressive to think about living in a place that was so significant and a cultural center for a lost civilization.” While she majored in history rather than anthropology, she took as many classes in cultural anthropology as she could. Although Caldwell now lives in St. Louis, the links with anthropology and Moundville continue. Her daughter married an anthropology student and lives between Tuscaloosa and Moundville. The Department of Anthropology’s annual reunion is held every year at Moundville as the “DeJarnette Barbeque.”

Caldwell would like to see Moundville developed to its full potential as a research center. “The site at Moundville has true significance in understanding and appreciating the people and their culture—those who lived in Alabama before the Europeans found this country. Since they had no written language, we can only learn from their art and from excavations of their living sites. There are many unanswered questions about what happened to such an apparently thriving community,” she said.

One of the UA anthropology students who considered what happened to that thriving community was Tim Mistovich, who graduated in 1977 with a degree in anthropology. While an undergraduate, Mistovich worked in the museum system at Smith Hall and visited Moundville. His familiarity with the park increased in 1978 when he began as a minimum wage “shovel bum” or field technician at the OAR, living at Moundville. From 1978 to 1989, Mistovich traveled the state doing archaeological research and surveys. He earned his master’s degree in 1988, for which he did research on a satellite Mississippian site in Tuscaloosa where the Oliver Lock and Dam now stands. He studied the effect that the growth of Moundville had on surrounding villages; then, as now, cities became the focal point of the countryside and affected a much wider area than their immediate acreage.

After leaving OAR, Mistovich founded his own company, Panamerican Consultants, to do the same sort of work he had been doing as a student. His cultural resource management company performs cultural resource surveys, site testing and evaluation, data recovery and mitigation, and architectural assessment. This focus means that Mistovich can go into an area or onto a piece of land before it is developed and determine the archaeological value and the best way to either save, work around or excavate whatever can be preserved. Surveys of this type are required any time federal money is involved in a building project, an archaeological equivalent of an Environmental Protection Agency impact statement.

Although his company is based in Tuscaloosa, Mistovich now lives in Florida, and no longer studies Moundville. However, he said he still appreciates it as the “largest and most intact prehistoric mound site in the Eastern U.S.” According to Knight, Mistovich continues to give back to UA by hiring anthropology students and supporting the UA Press to publish affordable archaeology books.

Knight agrees with Mistovich’s evaluation of the importance of Moundville. “I enrolled in my first archaeological field school under DeJarnette at Moundville in 1973, so Moundville was the first site in which I ever put a shovel,” he said. Knight now works with the Museum of Natural History as curator of southeastern archaeology. “I’m not sure that many visitors to Moundville appreciate just how famous and important it is,” explains Knight. “Students of archaeology the world over learn about Moundville, just as they learn about Stonehenge and the Great Pyramids. Graduate students from the universities in Michigan, California, New York, Illinois, Oklahoma, Ohio and North Carolina have come to Moundville to do their studies in recent years.” Eleven doctoral dissertations have been written on Moundville, although none by UA students—yet. In 2002, the University instituted a doctoral program in anthropology.

The biggest issue facing Moundville Archaeological Park is the same one facing all educational facilities in Alabama: funding. Budgets have been cut, staff reduced and a state grant lost. According to Moundville Director Bill Bomar, “We are going through a very difficult time and trying to become more creative about earned income and increasing revenue from events and rentals while still serving the public as an educational resource.”

Some of those public educational services include a welcome center and Indian Village dioramas, Native American artists-in-residence, summer camps, and craft classes in basketry, gourds and flintknapping or chipping out Indian-style arrowheads. One of the park’s biggest events is its annual Native American Festival in October, a four-day celebration that hosts 15,000 visitors, including many schoolchildren.

Not all the financial news is bad, however. Moundville recently received a $40,000 grant from the National Endowment for the Humanities to plan renovations to its museum. Funds will be used to upgrade exhibits that date back to the 1970s and to display information that has been discovered since then. While the planning is just beginning, Bomar hopes that the renovations will be complete in two to four years.

On another positive note, Bomar reminds alumni that members of the National Alumni Association are admitted to the park free most days, and receive discounts to attend special events. For more information, visit http://moundville.ua.edu, or call 205-371-2234.

Katherine Walcott is a freelance writer based in the Birmingham, Ala., area.