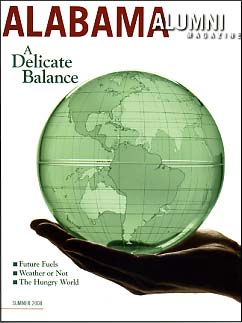 Will a technological society on a small, blue planet become its own undoing?

The water we drink, the air we breathe, even the fuel we put into our cars ultimately come from one source—the Earth. As a society we have for years been struggling to protect our home while at the same time slowly devouring it. Steps such as the Clean Air Act and power plant restrictions are up against the continued use of energy-draining appliances and gas-guzzling SUVs. It seems we are faced with important choices about our treatment of the planet—not only for sustaining life now, but for the future.

Global warming, or the gradual increase of the Earth’s atmospheric temperature, has become a bone of contention among many environmental researchers. The issue in question is not whether we are getting warmer—data from the National Oceanic and Atmospheric Administration and NASA shows that the average surface temperature has increased by about 1.4 degrees F since 1900—but instead what are the causes of climate change and what will be its ultimate outcome?

Dr. John R. Christy, Alabama’s state climatologist and member of the Intergovernmental Panel on Climate Change, is also a professor of atmospheric science and director of the Earth System Science Center at The University of Alabama in Huntsville. Working at UAH to build long-term data sets that explore climate change, Christy doesn’t deny that humans are releasing carbon dioxide into the atmosphere or that extra helpings of CO2 have some warming effect. But he doesn’t think people are solely responsible for increased temperatures.

“The climate is always changing,” Christy said. “I would say that there is no real scientific way to show what proportion humans are responsible for.”

As for the effects, scientists are still uncertain what global climate change will mean in the long run. Dr. Derek Williamson, associate professor of civil, construction and environmental engineering at The University of Alabama and director of UA’s Atmospheric and Environmental Operations Program, explained the confusion.

“Where all the uncertainty comes in and where you get people crossing swords all the time is what the effects of climate change will be,” Williamson said. “On one side, you get people who think climate change will spiral out of control. On the other side, you have people who feel that we don’t really know. And then you get everybody in the middle.”

Apparently, that middle ground is where most of us stand, as evidence continues to be gathered and assessed and our opinions vacillate with the news stories of the day.

According to the Environmental Protection Agency, effects of global warming could include a higher sea level, melting glaciers and changes in plants and animals, to name a few. However, measured against the devastation of Hurricane Katrina, how severe will these changes be?

Christy is not so worried. “In the evidence we have, we don’t see catastrophic changes occurring,” Christy said. “Everything we see now has happened before—the sea level has risen in the past, temperatures have risen and fallen in the past.”

Water is essential for all life on Earth. For centuries, we have relied on the planet’s vast supply of this resource, and perhaps taken it for granted; yet with growing populations and increased cultivation, the availability of potable water is dwindling.

Dr. Amy Ward, UA professor of biological sciences and director of the Center for Freshwater Studies, said water problems are on the horizon. “One of the key issues of the 21st century will be maintaining adequate quantities of high-quality fresh water for any number of human needs,” Ward said. Such necessities include drinking water, irrigation for agriculture and supplies for industries that require quality water for production.

Major challenges in water quantity and quality are arising in the local, regional, national and even global sectors. According to United Nations Security General Ban Ki-moon, water shortage crises should be at the top of the global agenda. It is projected that by 2025 more than half of the world will experience freshwater deficiencies, and by 2050 nearly 75 percent of the population could face significant shortages.

Ward said population growth and land-use changes have also affected water quality and will continue to in the future. Along with urban and suburban growth and the removal of forests for development comes the release of sediments into rivers and streams. “This is exacerbated by the fact that many of the natural retention features of rivers and streams have been largely eliminated over the last several hundred years, such as floodplains, vegetation and wetlands,” Ward explained.

Without proper withholding of nutrients in the soil, these can move into rivers and streams and ultimately be carried to other areas, such as the coast, said Ward. Furthermore, excess nutrients in those locations can stimulate algal and plant growth that, when it dies, consumes oxygen needed by other organisms, such as fish and shellfish. An example of the devastating effects of excessive plant growth can be seen in the Dead Zone off the coast of Louisiana, she noted.

But, Ward maintained, people and development are inevitable forces. “We are going to continue to have population growth,” Ward said. “Growth is going to happen. So the real question is how do we manage our resources in a way that they can be sustained in a high-quality form for our economic as well as physiological well-being.”

Ward said the answer lies in becoming informed. By learning exactly what the challenges are, each of us can assess strategies for what can be done and support plans for regulating outputs so that they don’t become problems.

“We all have responsibilities and opportunities as citizens of our country to express what we would like to have happen,” Ward said. “And if we are knowledgeable about the issues and ways to manage the problems, then we can have a voice, and vote on what’s done. That’s probably the most important thing that we can do.”

Air pollution may be one of the most elusive environmental problems we face, for the most part because it is hard to see. But what it lacks in appearance, it makes up for in adverse effects.

Williamson said poor air quality is a major contributor to asthma and other respiratory ailments, which make up one of the top causes for hospital and emergency room visits. It also tends to disproportionately affect the aged, the immune compromised and the young.

To make matters worse, humans are not the only ones at risk. According to the EPA, air pollution can also threaten the health of plants and animals, as well as damage the ozone layer in our atmosphere.

Outdoor air pollution most commonly exists in the form of photochemical smog, which, according to Williamson, contains about 100 reactive chemicals, “none of which are very good for you.” The only one that scientists currently track is ozone, which they use as kind of a marker for all reactive chemicals in the air.

The thing to remember about ozone is that it is created, not emitted, said Williamson. “Think of the lower atmosphere as a big cooking pot, and we are putting in the ingredients. From our power plants, from our cars, from mowing our lawns, from running barbeque pits or industrial boilers–anything that uses any sort of combustion or any volatile organic compounds like fuels, cleaning agents or solvents—they react together in the presence of sunlight to create photochemical smog,” he said.

And we’re emitting these ingredients all the time. Williamson said that more than 200 million people are estimated to be exposed to air quality that is harmful enough to have an impact on their health on a daily basis.

So what can we do?

“We’ve done a lot of the big things and technology will continue to develop and we will continue to make improvements, but as we go forward if we want more of a difference to happen, it’s ultimately going to come down to human behavior,” Williamson said.

Though difficult, the key is to cut back on combustion and energy consumption. Simple measures such as driving less and using more energy-efficient products can make huge improvements in air quality. “There are behavioral choices we can make, and they make a difference,” he said.

Environmental efforts are not restricted to research labs. In fact, University of Alabama students are doing their part as well. Such efforts are exemplified through organizations such as the Alabama Environmental Council, a student group focused on alerting the Tuscaloosa community about environmental issues.

The council shows environmental films throughout the year, hosts events encouraging awareness and conducts glass recycling drives. They also collaborate with and assist other local organizations with events, such as the annual Hurricane Creek Cleanup hosted by the Friends of Hurricane Creek.

The AEC held its sixth annual EarthFest on April 21, a daylong event providing a chance for citizens to become more involved in environmental issues. This year’s event featured representatives from the Sierra Club and Tuscaloosa Recycling, among other speakers, and also included face painting, tie-dying, vegetarian and vegan foods and performances by numerous bands.

“These environmentally conscious organizations and events help to put things in perspective of how we interact with the world around us, and help to show the impact that humans have made,” said Joseph Wright, president of the AEC. “They are also ways to get people to connect with each other and to become involved in not only campus activities, but also in the surrounding communities.”

The University has also joined the U.S. Green Building Council, an organization focused on sustainable building methods. Plans include utilizing “green building” in its facilities, incorporating methods and materials that have the least impact on the environment, and providing information on the concept through educational courses.