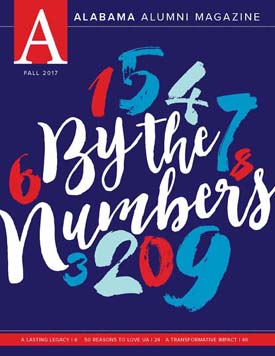 In the late 1990s, Kyle Buchanan, a Tuscumbia, Alabama, native had applied to The University of Alabama, but was dangerously close to attending another university in the state.

“This is like the worst of all scenarios,” Buchanan laughed. “I probably would have gone to Auburn.”

But when Buchanan received an alumni leadership scholarship covering his freshman year tuition at UA, he set his sights on the Capstone. With a twin brother who was also going off to college, cost was a large part in his decision. “What may have seemed like a smaller scholarship in the grand scheme of things was actually a huge deal for my family,” he explained. “It really changed my trajectory as far as where I wanted to attend college and subsequently the rest of my life, just based on receiving that support from the alumni association.”

For much of the University of Alabama’s history, there was no alumni association-based scholarship program—but that changed in 1967.

Fifty years ago, the association’s executive committee decided that the National Alumni Association would make a concerted effort to award students for leadership and academic achievement, and paved the way for 25 freshmen to receive renewable scholarships to the Capstone.

“Awarded on the basis of merit, these scholarships are expected to attract some notable young scholars and to assist them in meeting the increasing financial burden of education,” wrote the Alabama Alumni News at the time. “The unique feature of this ambitious program is the caliber of students to whom our alumni will be appealing.”

The scholarships carried a $2,000 total value—$500 per year—granted students maintained a “B” grade average. At the end of the first four years, a total of 100 students received the scholarships, totaling a sum of $50,000 provided by the Alumni Fund, according to the Alumni News.

Today, the NAA’s scholarship program has grown to more than 542 endowments, carrying a corpus value of nearly $44 million. During the 2016–2017 academic year alone, the NAA awarded more than $4.8 million in assistance to 2,600 students. Over the last half decade, it has become one of the premier alumni scholarship programs in the country, something that is made possible through the efforts of alumni, chapters and generous friends and donors, said Deborah Parr, manager of alumni scholarships for the NAA.  “It is wonderful to know that these scholarships will be available to help students for years to come,” Parr said. “It truly changes lives.”

It is, perhaps, the NAA’s most lasting legacy.

When Paula Jeter starting working at the NAA in 1983, there were only a handful of endowments and a small operating budget. Growth came slowly at times and at rapid pace at others, Jeter said. “So many people wanted to expand this program to ensure it became a flagship program,” she explained.

In the late 1980s, a catalyst for the program emerged. Thanks to the efforts of former Director of Alumni Affairs, Pat Whetsone, the collegiate tag matching gift program was established, meaning a portion of collegiate tags sold in the state of Alabama went to fund scholarships through the NAA. “The chapters really bought in to assist local students,” Jeter said. “Due to the vision of Pat, we really hit our stride.”

Jeter retired after more than 30 years with the Office of Alumni Affairs and said she feels honored to have witnessed its growth and its impact on students. “The most rewarding part was to see how excited and appreciative students were to receive an alumni scholarship,” Jeter said. “Some students would not have been able to attend the University otherwise, and we were able to make dreams come true. I am honored, and humbled, to have been a small part of the Alumni Scholarship Program achieving a 50 year milestone.”

Clif Davis took the reins as the manager of Member Services and Scholarship Department in 2003 until his retirement in 2016. It was immediately apparent that Jeter’s leadership was key to the program’s success, he said, especially its structure for selecting and awarding scholarships. While some procedures changed, many of her policies have endured, he added, much like the importance of the program.

“For alumni staff, the commitment to alumni scholarships has always been taken with a respectful sense of importance, as warranted for the important task of making selection decisions on students to attend UA,” Davis said. “Simultaneously, you are helping individuals and families wishing to endow a scholarship, often in remembrance of someone special. For me, making alumni scholarship selection has always been a humbling experience. You see first-hand the scope of real personal and family needs expressed by bright young and dedicated high schoolers wanting to make a difference at The University of Alabama.”

During his time with the association, the number of endowments continued to rise, constantly reaching and surpassing milestones that were set. “For alumni scholarship staff, 2014 marked the beginning of an exciting NAA scholarship countdown to 500 endowments; this milestone would be reached at a record pace,” Davis said. “As 2016 came, my final year before retirement became extra special, as at the first division meeting with new Vice President of Advancement Bob Pierce, he proudly announced he had established scholarship number 500, the Bob and Kristi Pierce Endowed Scholarship in association with the Tuscaloosa County chapter. That was an important milestone for me personally and the alumni scholarship staff and a positive indicator of the health of this program and growth to come.”

When Dr. Charles E. Smith attended the University, it preceded the Alumni Scholarship Program. But he still left the Capstone inspired to give back.

While Smith worked to pay his tuition while at UA, his roommate was at the Capstone on scholarship. After graduating, his roommate went on to be a principal at a large Florida high school, Smith said, and ultimately a superintendent. “He would not have been able to go to the University without that money,” Smith said. “He was ultimately able to influence a lot of students, and that was one of the things I saw that demonstrated how scholarships could help people that otherwise might not be able to attend college.”

It was in his nature to want to help others, Smith said, so inspired by his college roommate, Smith has worked with the Dale County chapter of the National Alumni Association to endow numerous scholarships in his name and facilitate the endowment of several others.

Currently, Dale County boasts 22 endowments. “I don’t feel like I’m special for doing anything like this, but I have to admit I feel like I’m giving somebody a chance that they otherwise would not have one,” Smith said. “What I really like about this is it’s forever. Every year, a student will get that scholarship, and it may not pay a tremendous amount, but it tells them somebody cares.”

Knowing that somebody cared was a message received clearly by Austyn Jones—without her alumni scholarship, she most likely would not have found herself at the University. Jones received the R. C. Cobb Memorial Endowed scholarship, established for Fayette County, Alabama, High School students. “Deborah Parr called me and informed me that I received the scholarships, and I cried on the phone,” Jones laughed.

The scholarship was geared towards business majors, a requirement Jones met, but with one business class left to take she received an offer to teach high school math, an offer she felt was her true calling. Jones decided to take the job and take the business class online, meaning she no longer met the scholarship requirements. She called Parr to tell her the news; Parr subsequently reached out to Bobby Cobb, one of the scholarship donors. “I told her I understand if the scholarship gets dropped—I’m not meeting the requirements,” Jones said. “ She got back with me a few days later and said that Bobby was excited that I had found what I wanted to do, even if it was outside of business. He paid for my online class and gave me an additional $3,000 to help me get started in my career. That was the second time I’ve ever cried on the phone.”

Jones, who graduated in 2016, is still teaching math and currently working with the scholarship department to plan a donor recognition dinner for the Cobbs. The event will take place at Jones’ family-owned event venue in Fayette, and despite an exchange of letters and phone calls, Jones will get to meet the family who impacted her life so tremendously for the first time. “Personal connections are important to me, and I want to make them feel valued since they’ve made me feel so valued.”

Like Jones, it was an alumni scholarship that made a difference for two-time Alabama graduate Kristy Kirkland. Her path seemed to lead her away from the Capstone until the last possible second. It was a full-tuition scholarship from the Houston/Henry County chapter of the alumni association that steered her in a new direction. “Right up until the last minute, I thought I wanted to go to Birmingham Southern,” Kirkland said. “When I got the scholarship, it pushed me over the edge towards Alabama.”

Even after receiving her undergraduate degree in political science and journalism, Kirkland was still surprised to find herself back at the University for law school. Today, Kirkland owns her own practice in Dothan and is president of the local bar association. “I always wanted to be an attorney—I’d known that since third grade,” Kirkland said. “I never knew how great the law school was until I was on campus. I didn’t even think I’d get in because it was so prestigious. My education can’t be matched. I’d put mine up against any Ivy League school.”

After Buchanan received his alumni scholarship, he eventually graduated with his bachelor’s degree from UA in 2004. He then went on to receive two master’s degrees before starting his career in hospital administration, a path he quickly traced back to the scholarship he received. “It’s impossible to overstate the importance of higher education and making the right choice as to where to attend,” he said. “Opportunities like what the alumni association offers can be life changing. That support can help drive one’s decision-making into a path that continues not just through undergraduate, but through graduate levels and launching into a career just from funding received at 17 years old. It’s literally impossible to overstate the impact that has.”

Inspired by his experience as a student, Buchanan, now the executive director of Alabama Community Care, is part of a group seeking to reorganize the alumni association chapter in Colbert County. Not only is he excited to encourage Colbert County students to attend the University, but to also seek out students who might not be eligible for full-tuition scholarships that still deserve an opportunity. “To be a part of rejuvenating that chapter in my hometown is a very special thing and ultimately it gives me an opportunity to make contributions that hopefully have an impact on others, particularly those who are entering college, much as the alumni association did with me,” he said.